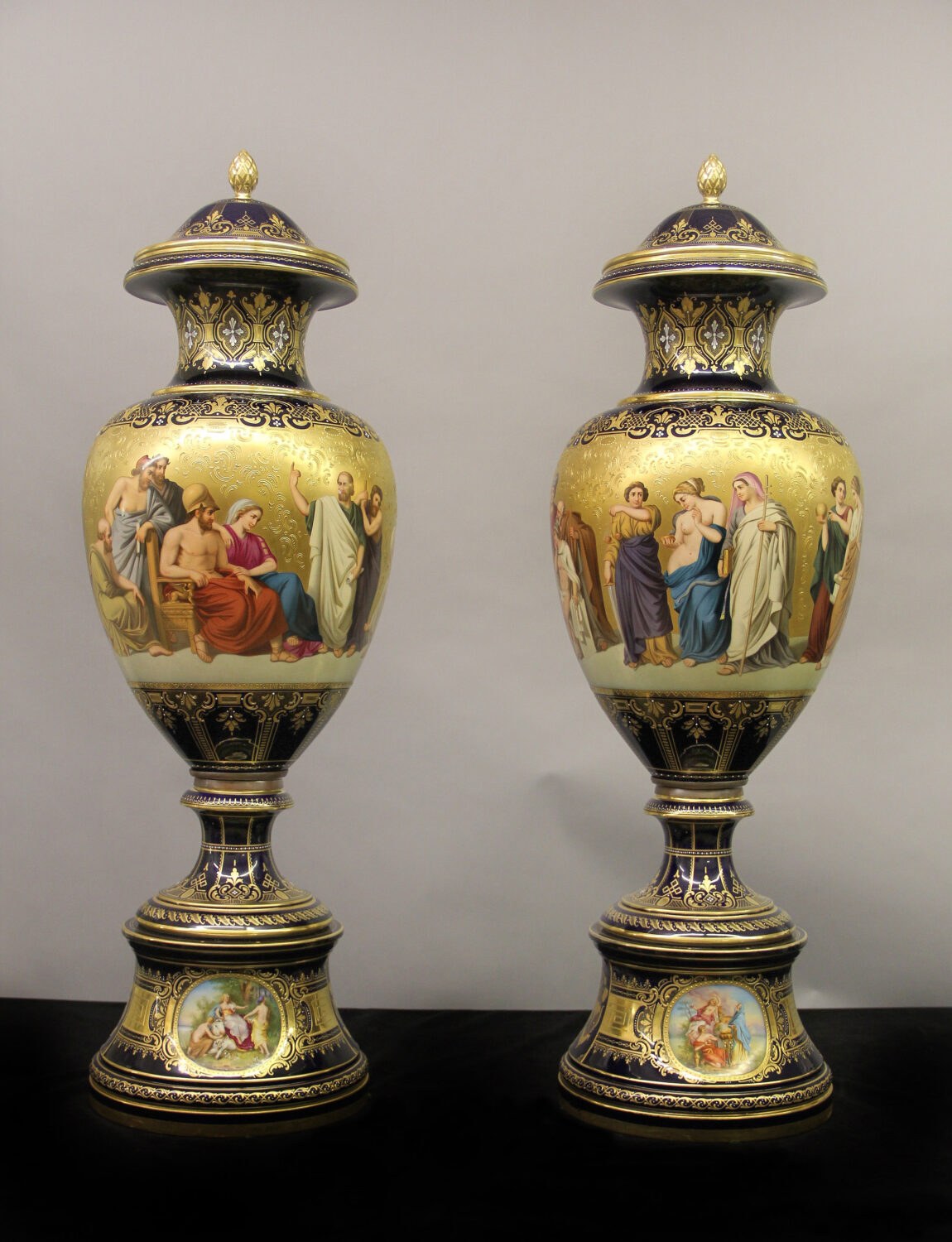 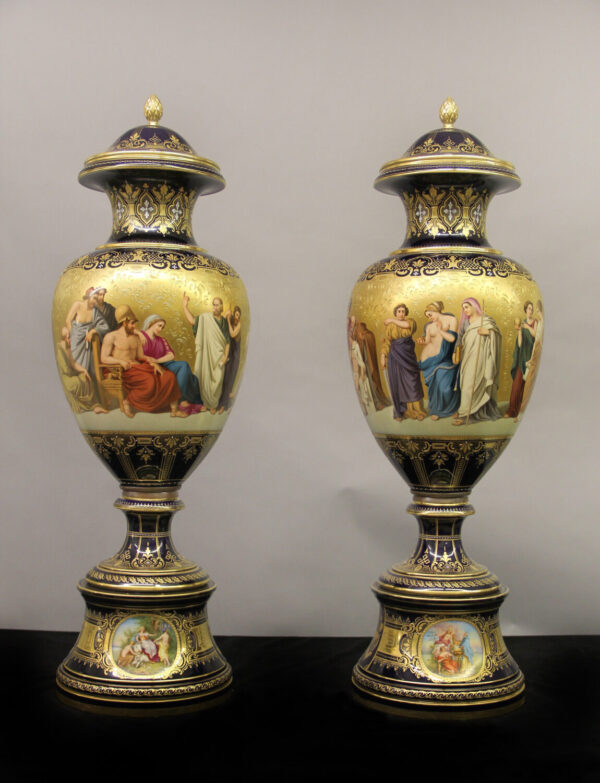 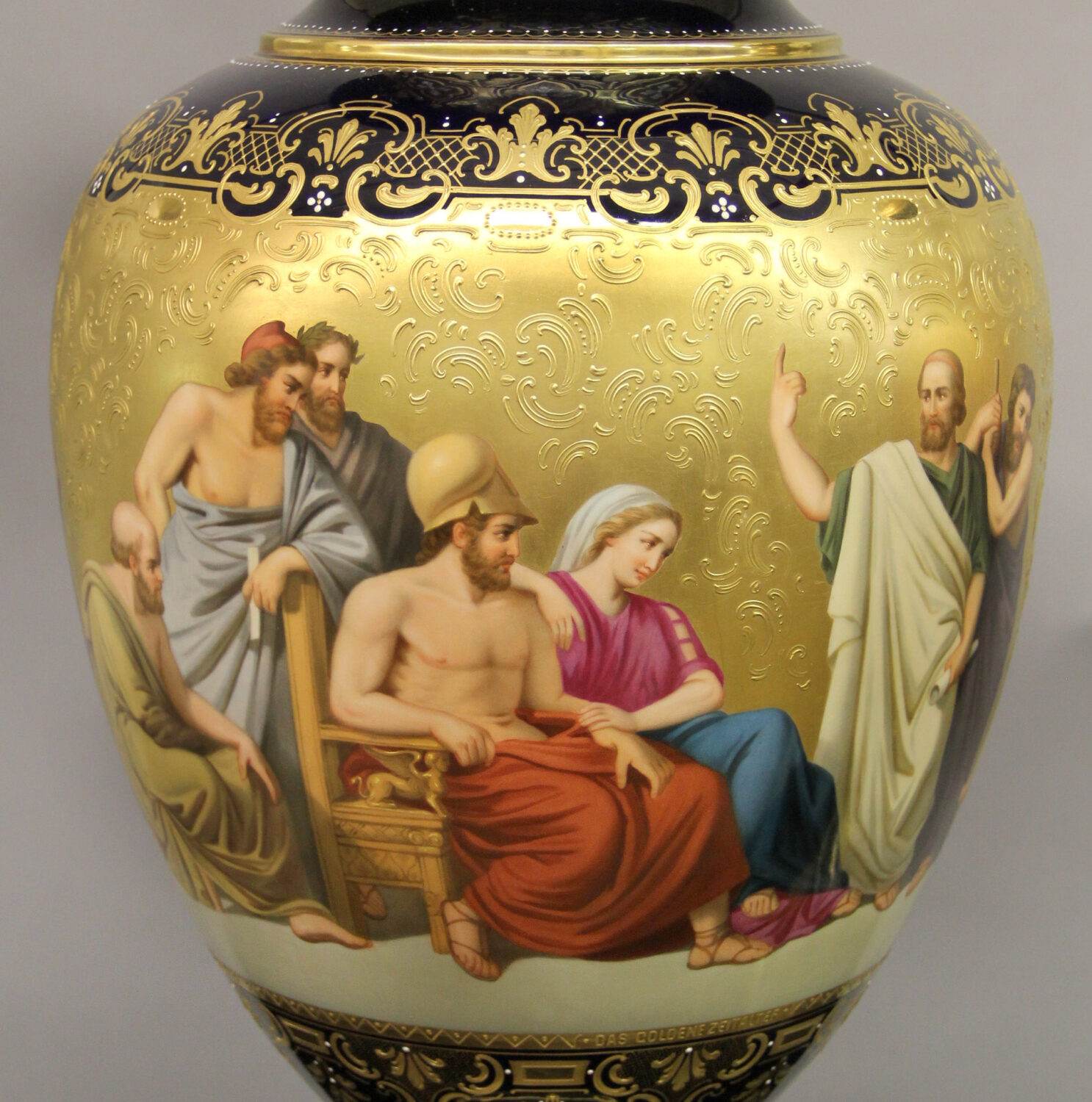 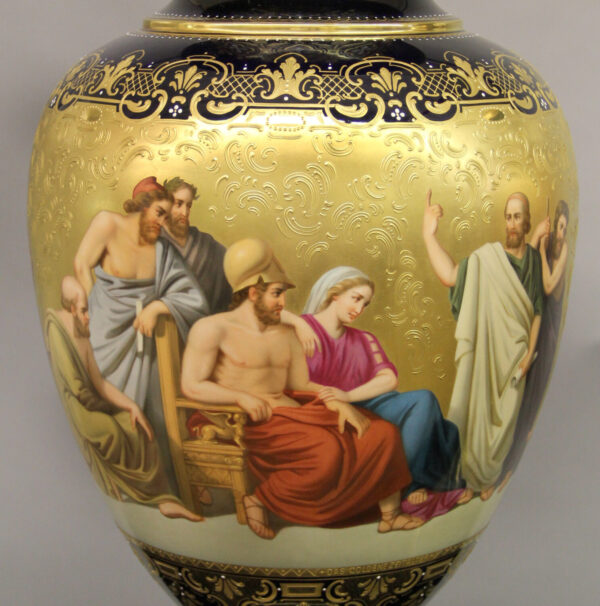 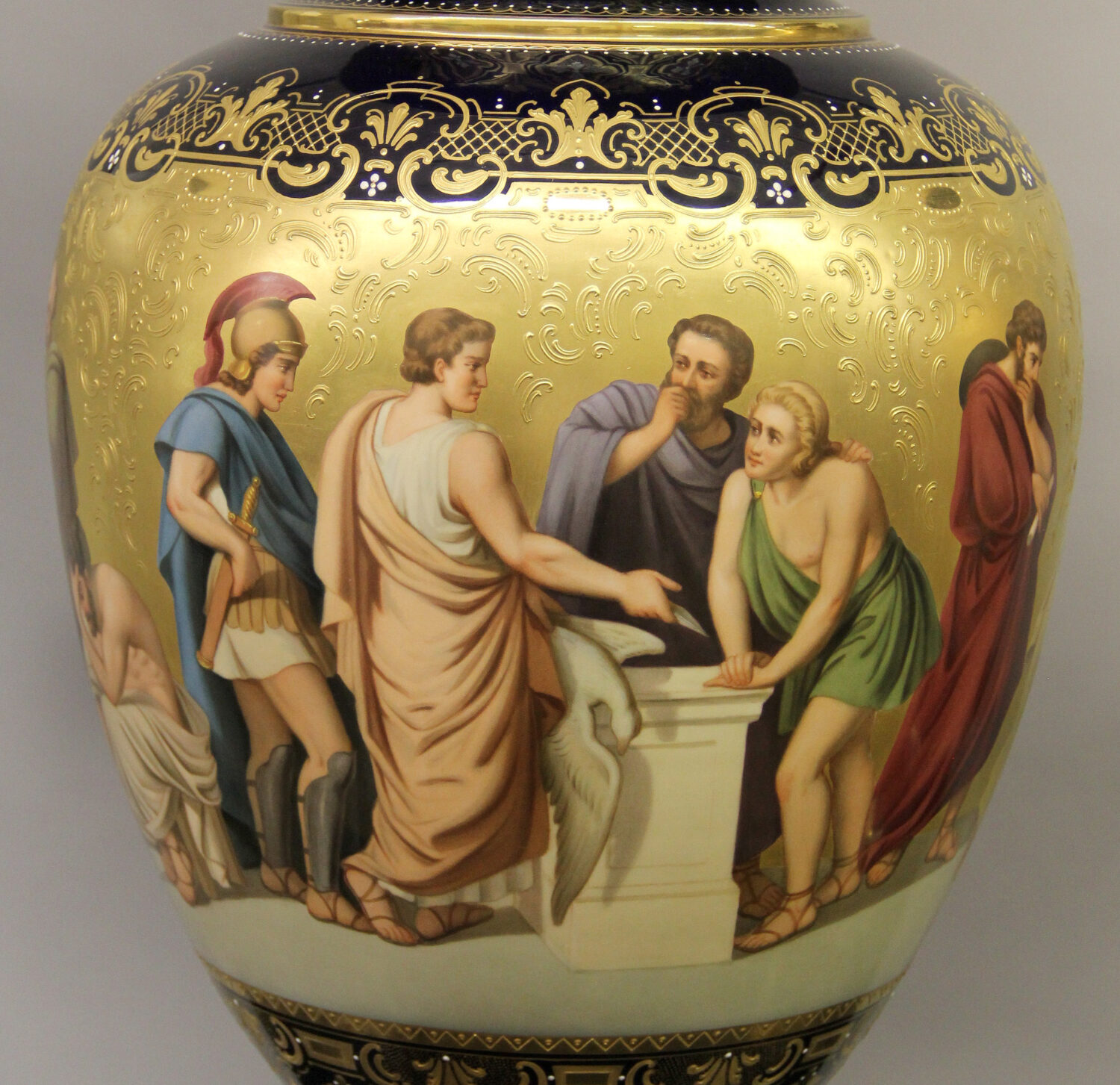 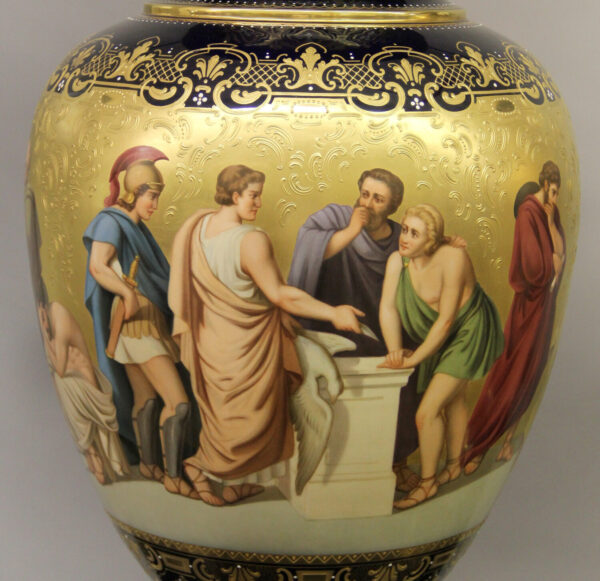 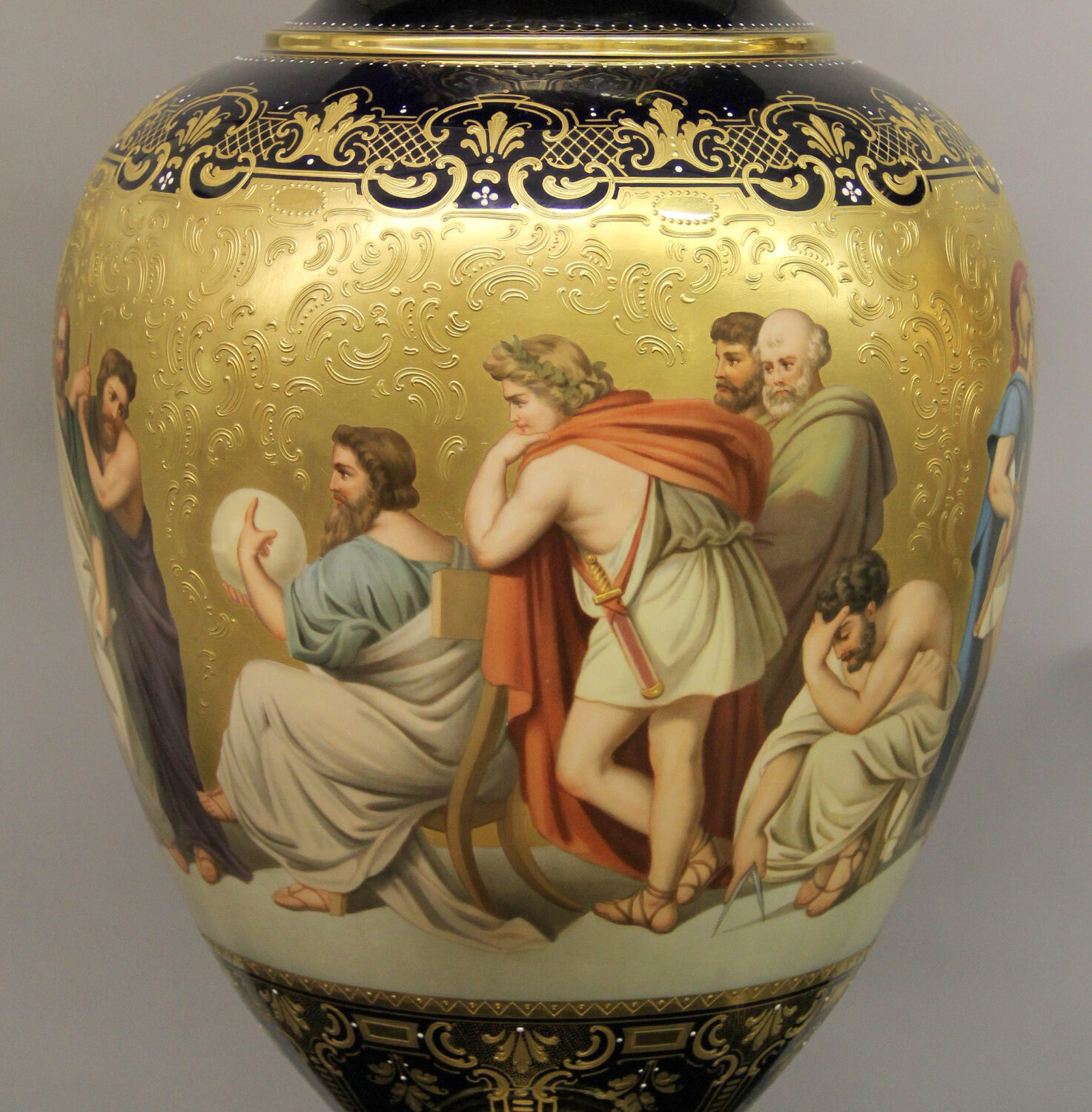 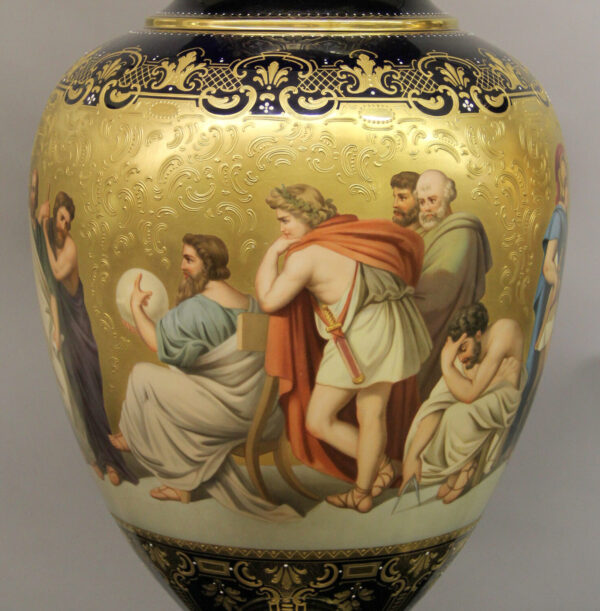 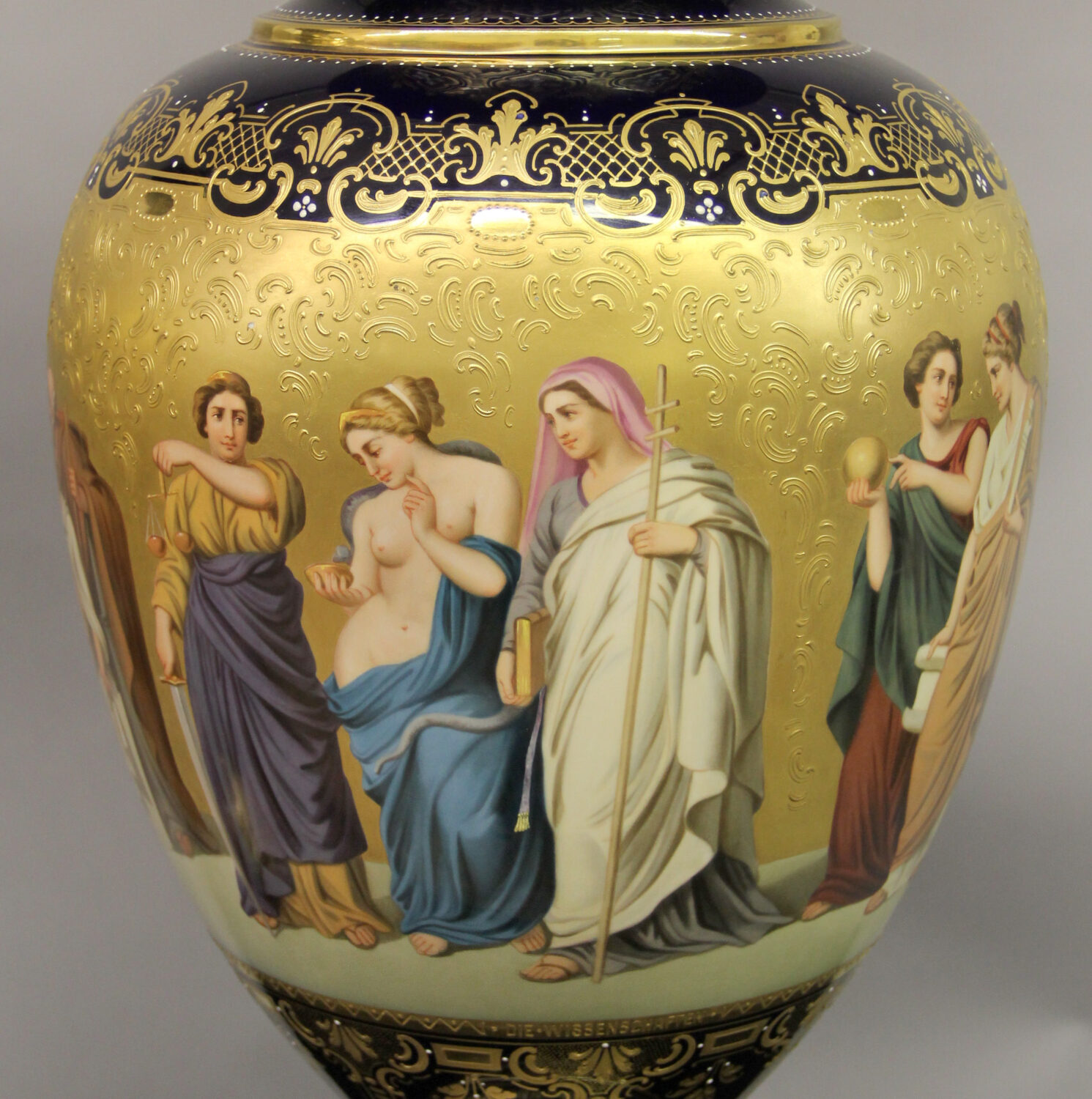 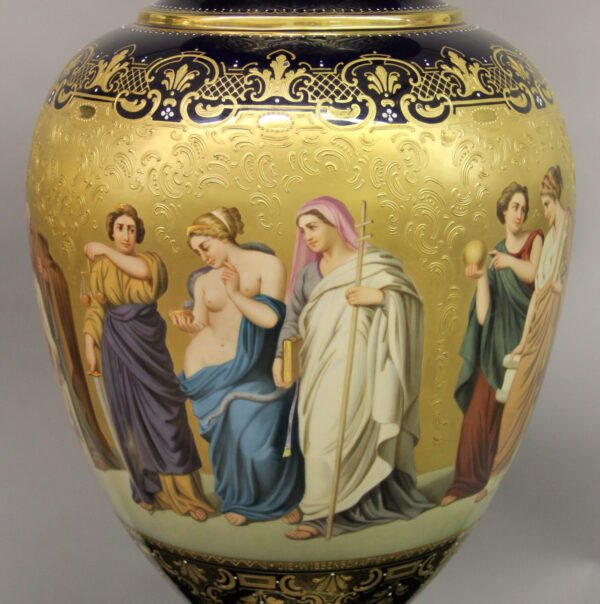 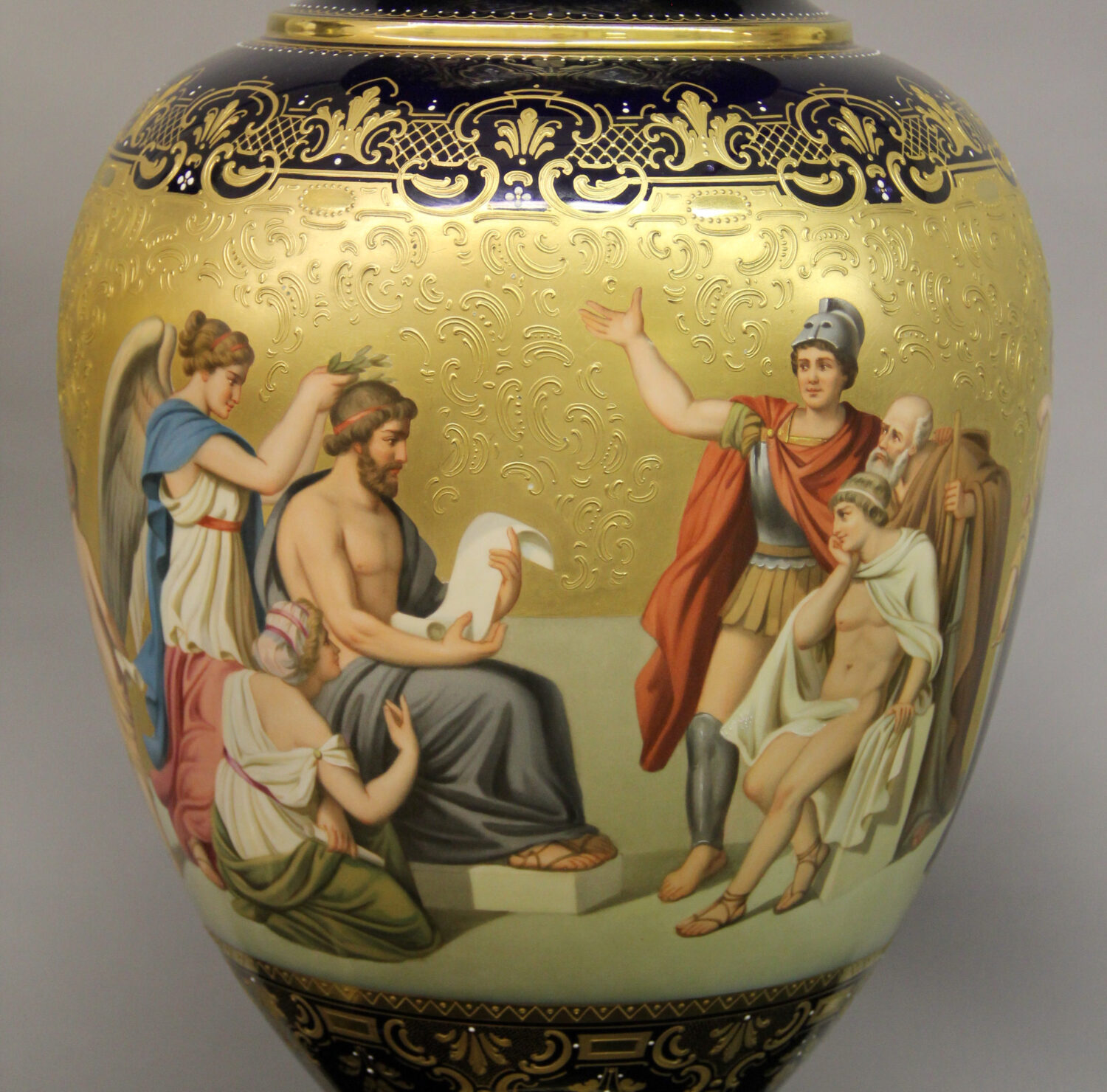 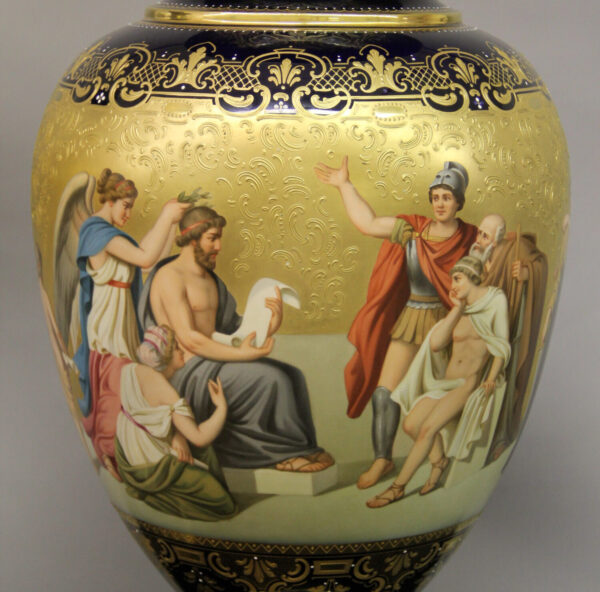 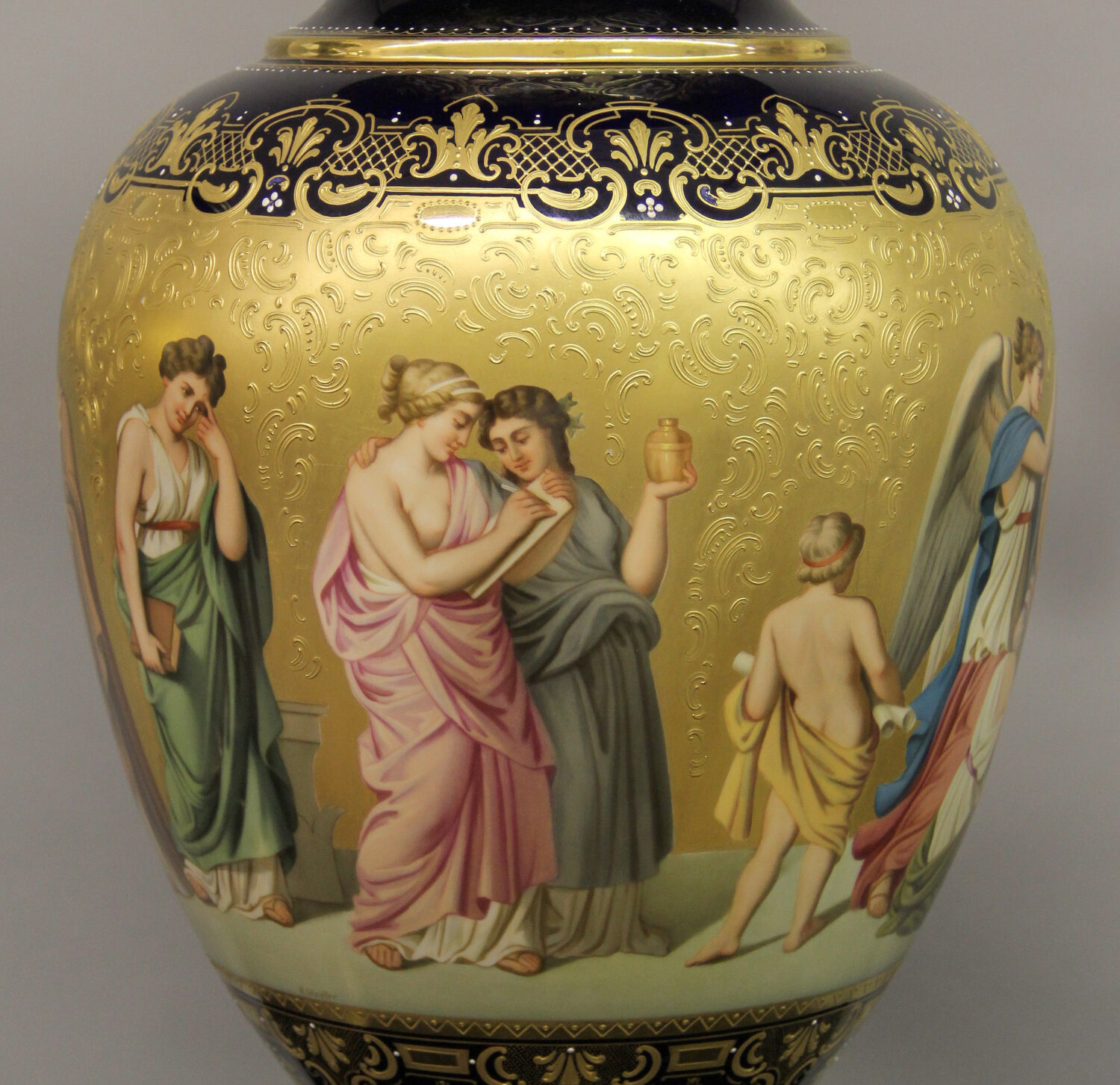 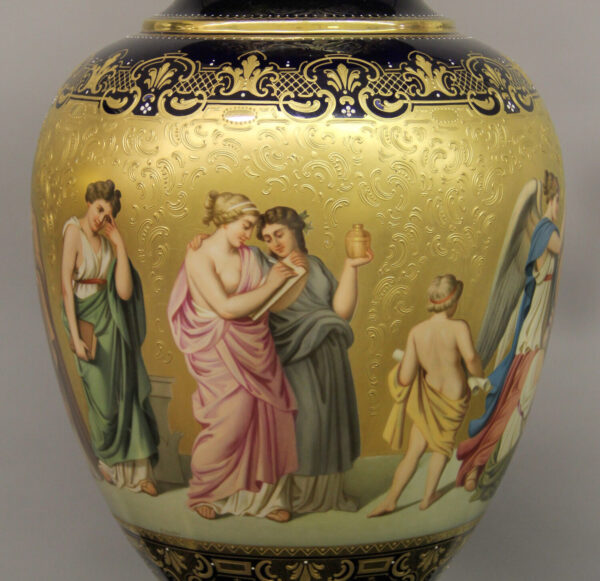 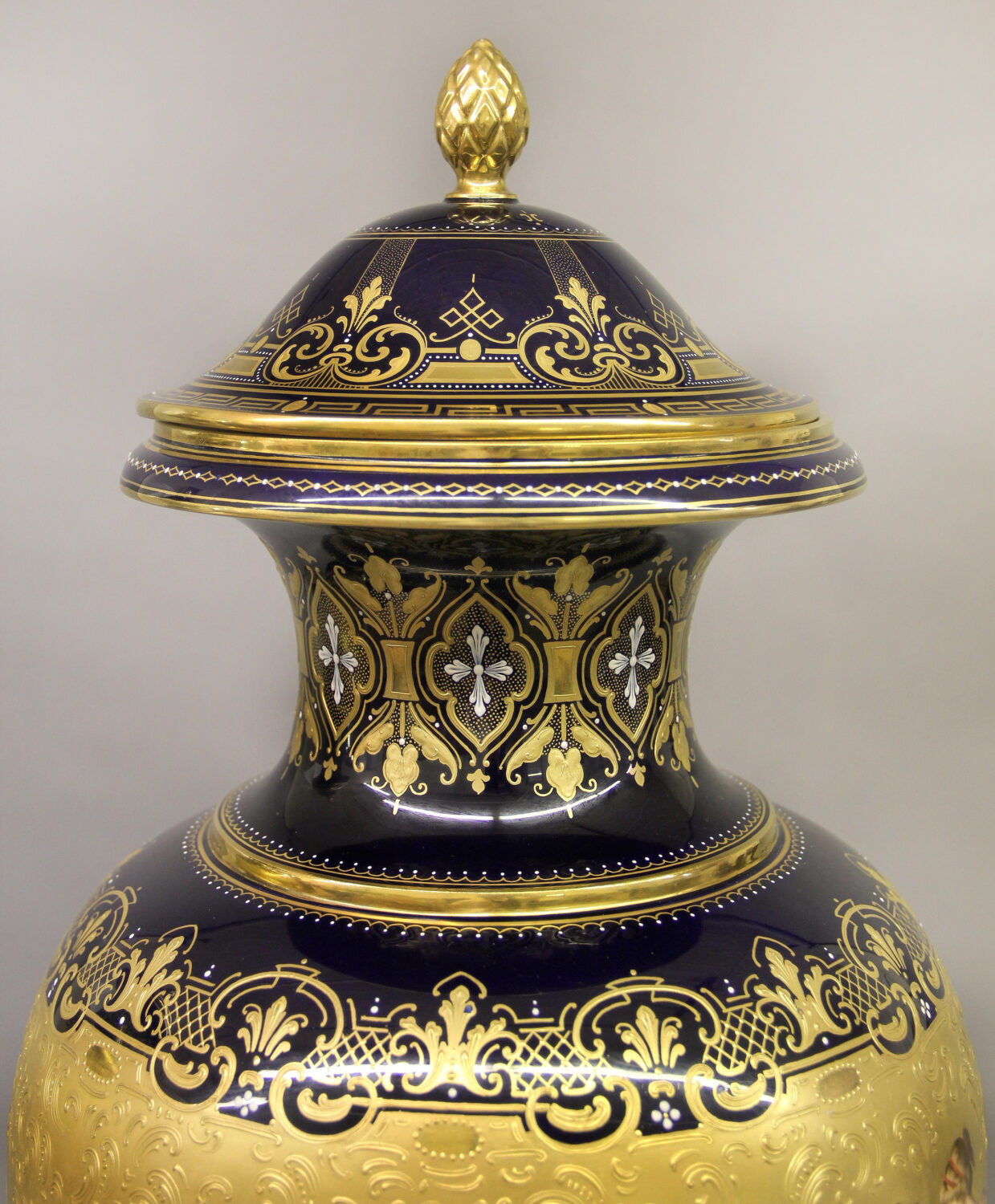 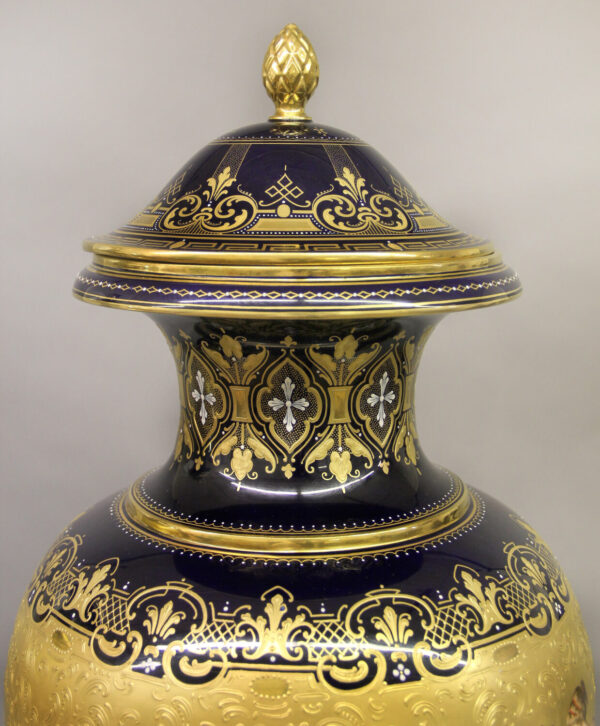 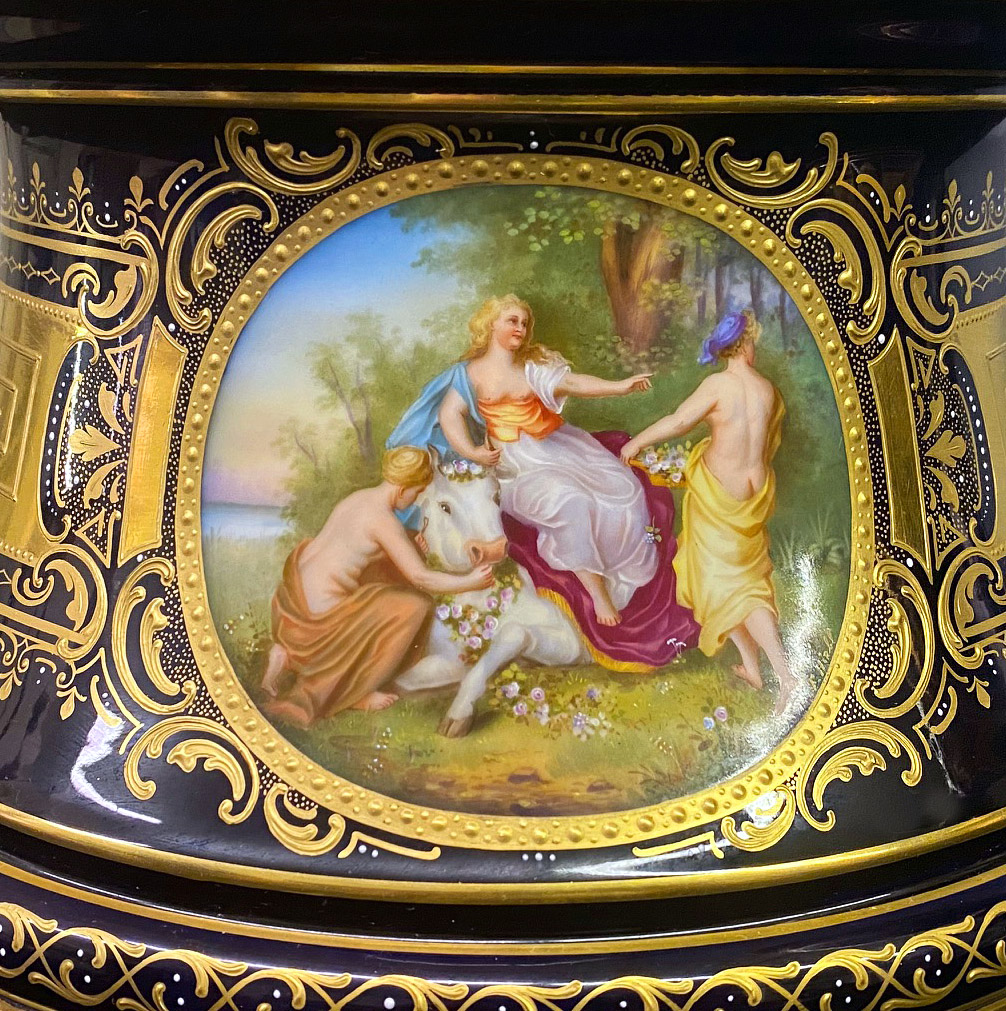 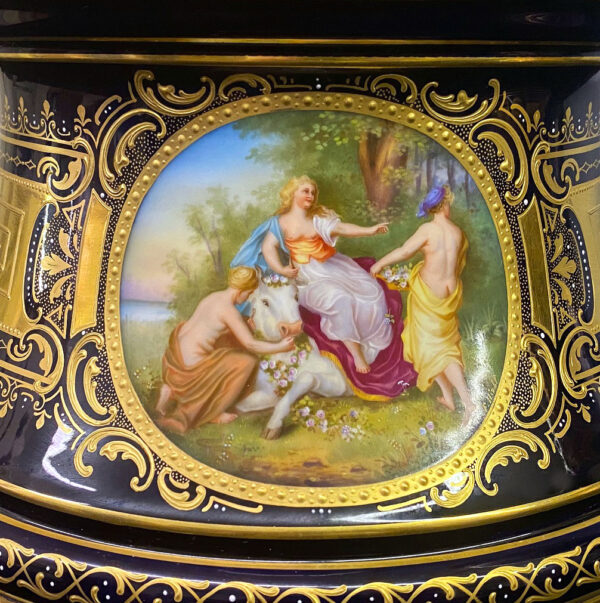 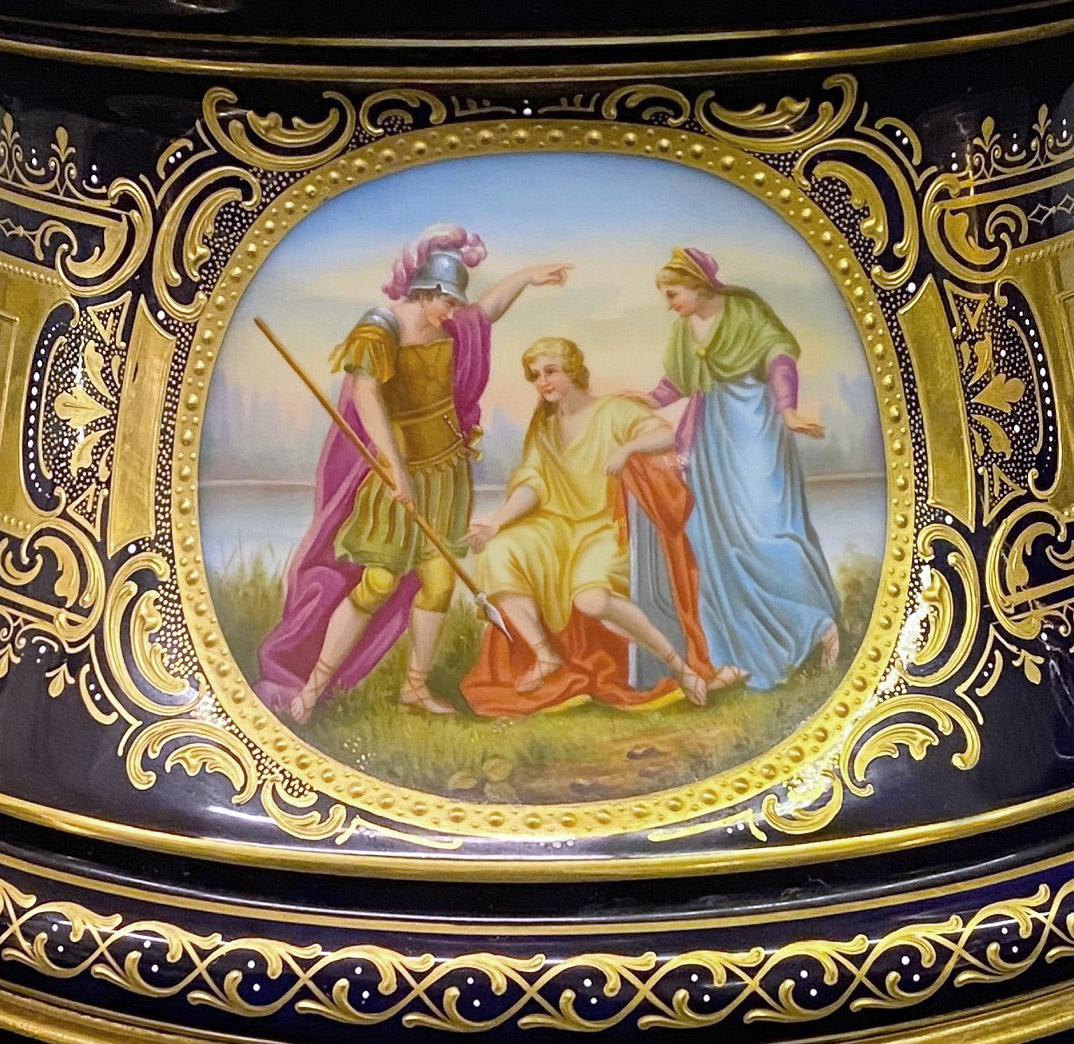 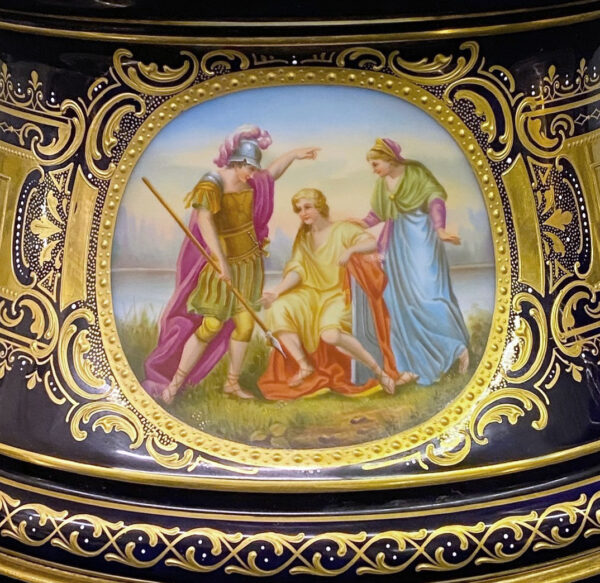 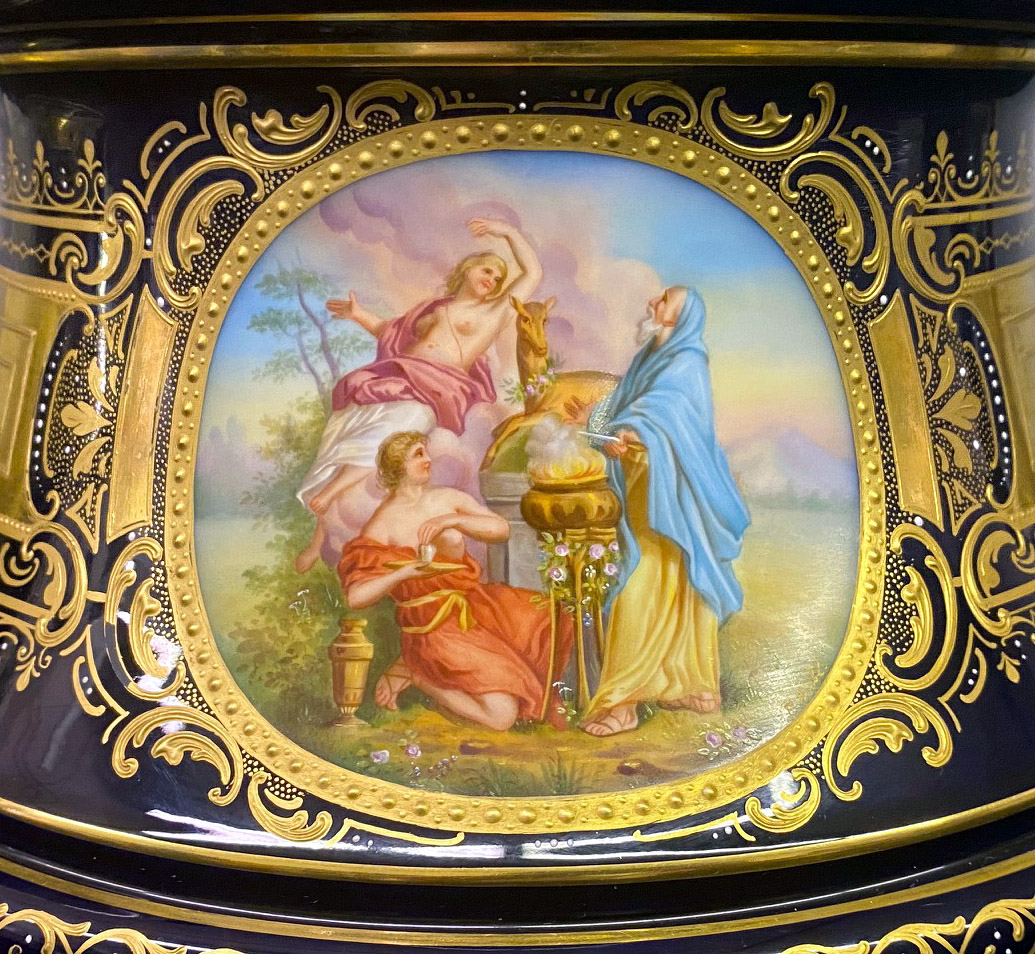 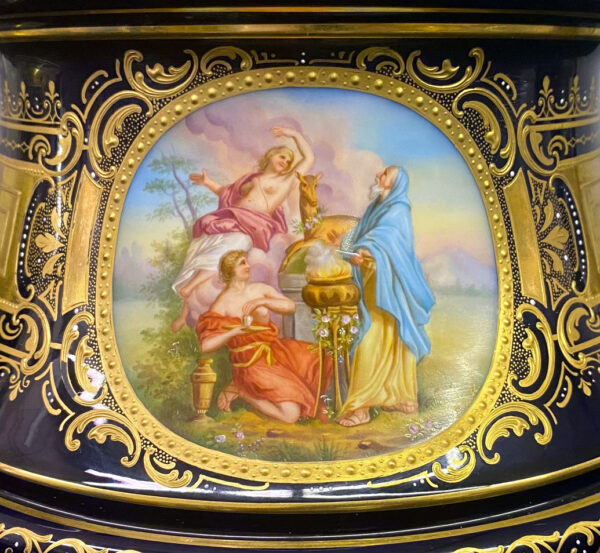 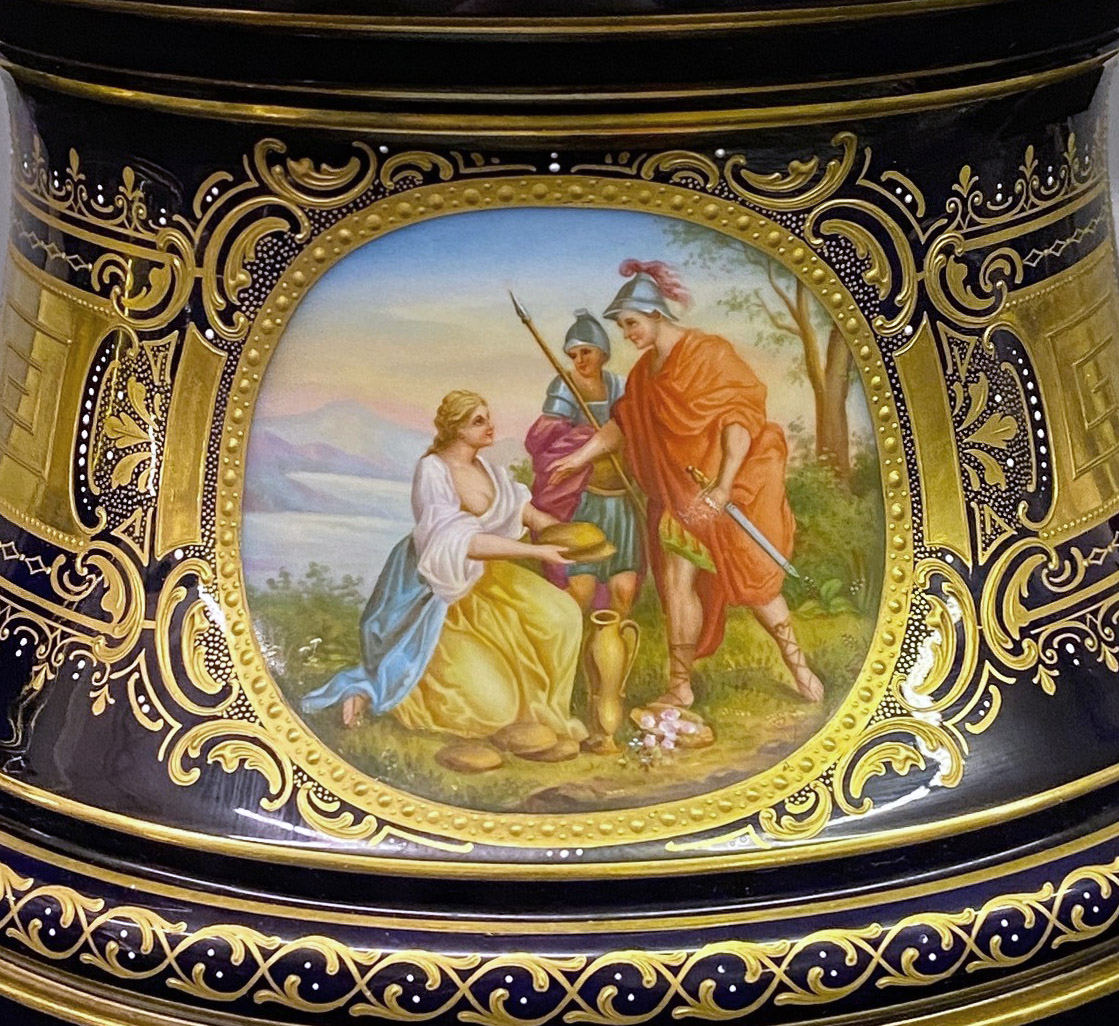 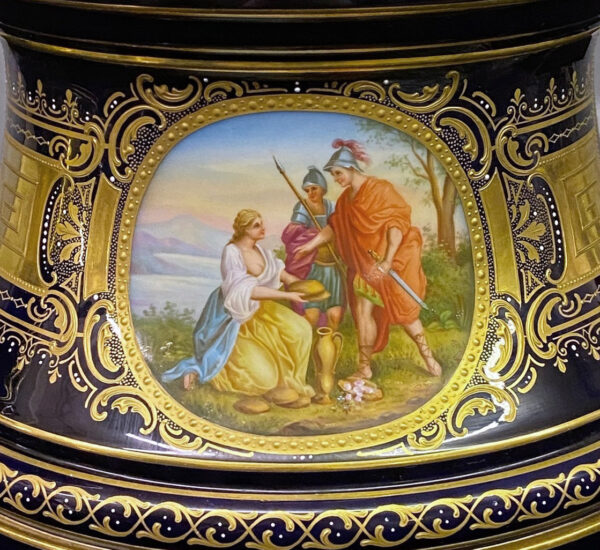 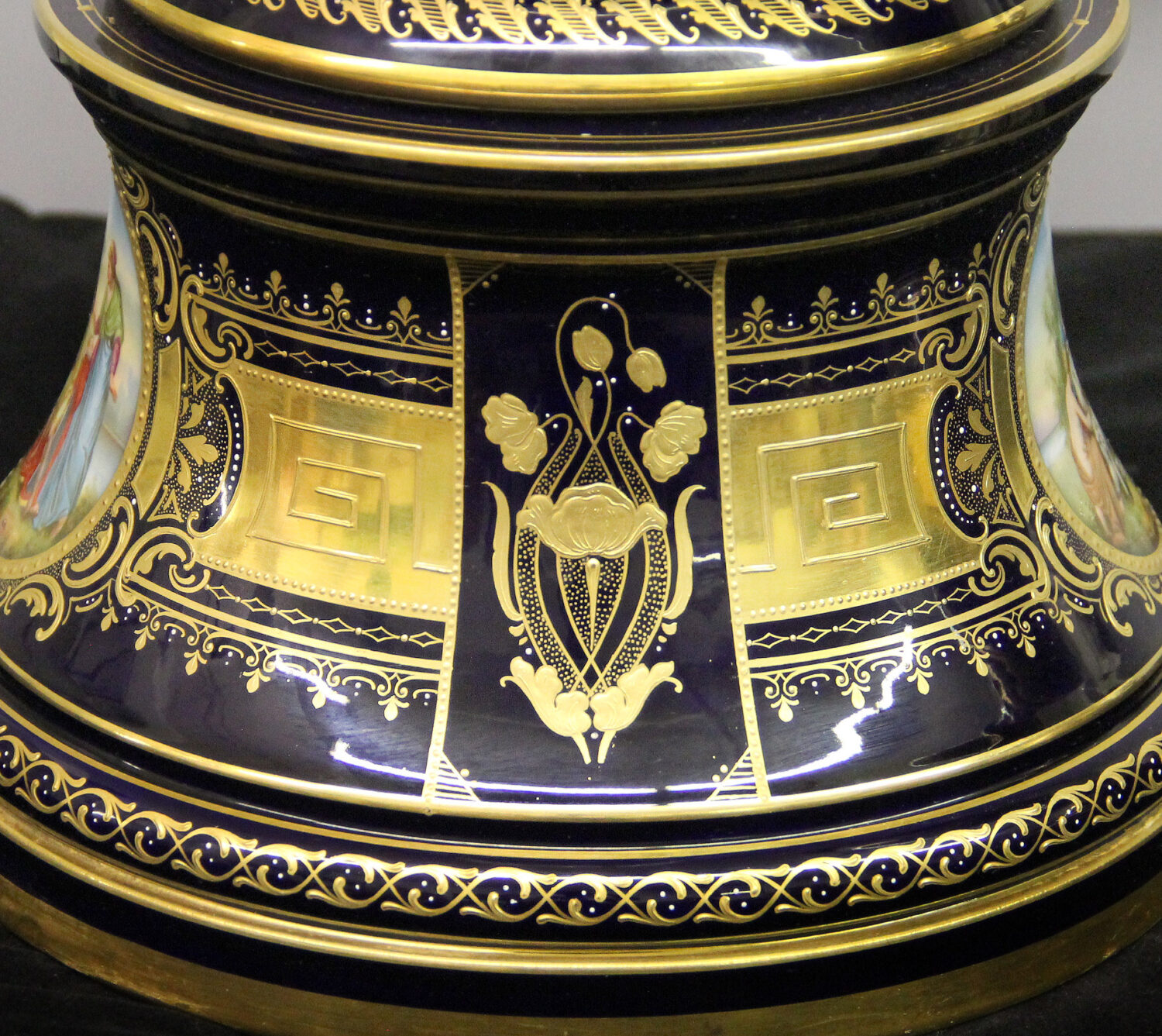 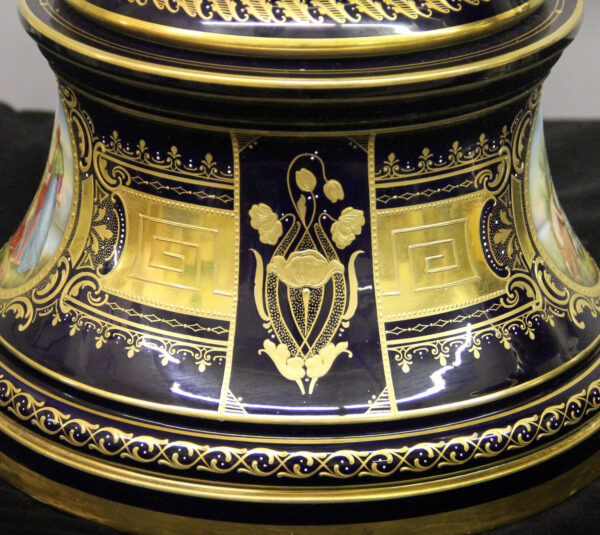 Painted with Scenes of Philosophy and the Sciences After Carl Rahl.

Each vase has a domed lid above a trumpet shaped neck and an ovoid body raised on a spreading circular socle and corresponding base.  The deep cobalt ground is richly embellished with raised, and jewelled, gilt arabesque and the main body of each vase painted with a superb continuous scene against a gilt-tooled background. The bases feature finely painted cartouches with classical mythological scenes; including ‘Europa’ personified as a bull, after the painting by Frederick van Balen.

The vases are signed to the continuous painted scene ‘H. Stadler’ for Hans Johann Stadler (1848-1916) and titled to the gilt border below ‘DAS GOLDENE ZEITALTER’ (The Golden Age) and ‘DIE WISSENSCHAFTEN’ (The Sciences).

The first vase entitled ‘DAS GOLDENE ZEITALTER’ (The Golden Age) skilfully depicts the different schools of Greek philosophy, with an elderly Plato with outreached arm pointing towards the sky, Antisthenes with his staff behind him; Aristotle teaching his followers anatomy, with Alexander looking on, Archimedes seated in thought and holding his pair of compasses and Anaxagoras holding a globe.

The second vase entitled ‘DIE WISSENSCHAFTEN’ (The Sciences) depicts the muses or personification of the sciences with Nike Crowning the triumph of Science; Jurisprudence holding her scales, Medicine with a snake coiled to her shoulders; Theology with her staff; Philosophy proclaiming from a book; Archaeology holing a vase; Mathematics with her hand to her temple.

The theme, and some of the representations, particularly that of Plato with his outstretched arm and Archimedes are ultimately derived from Raphael’s important fresco ‘The School of Athens’ in the Stanza della Segnatura at the Vatican.

Hans Johann Stadler was born in Germany in 1848 and died in Vienna in 1916.  He was a pupil of Hiltensperger and studied at the Academy Munchen. He worked for most of his life in Bamberg, Germany and was a known porcelain painter for Royal Vienna Porcelain Manufactory. Listed in Benezit (Dictionaire des Peintres) and Thieme-Becker (Allegemeines Lexikon bildender Kunstler).