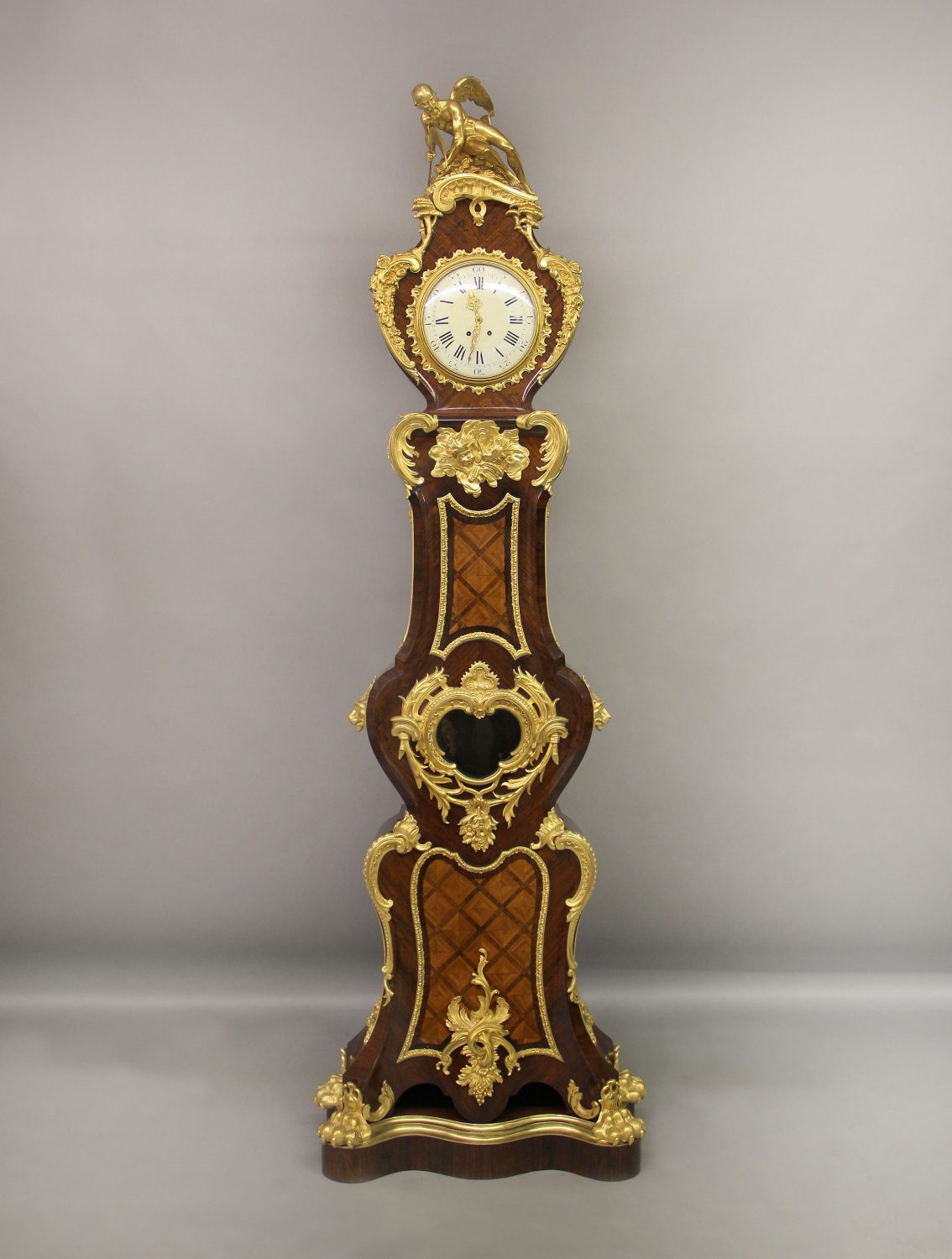 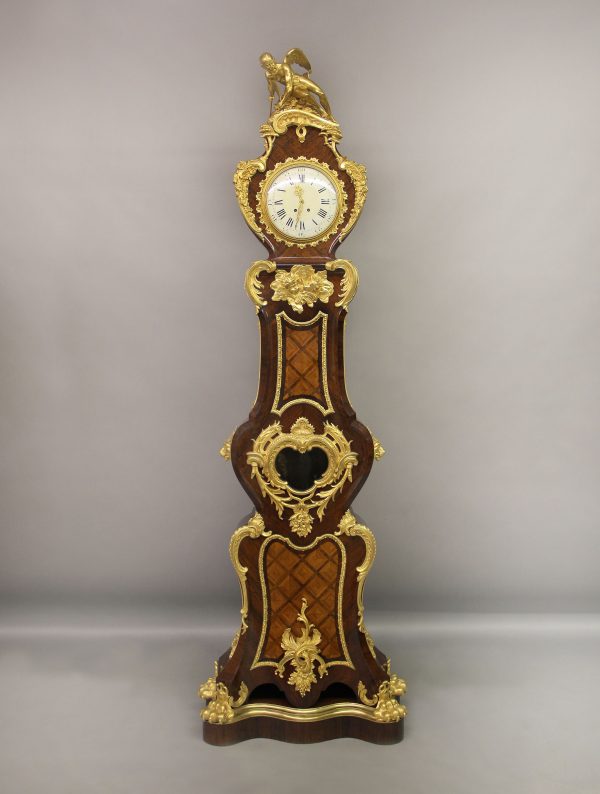 The serpentine-shaped case surmounted by a figure of Chronos, the head centered with a black and white enamel dial and surrounded with bronze flowers, above a plaque with cherub faces, the sides with bronze lions mask, standing on base with paw-cast feet and conforming plinth.

Signed F. Linke to the lower right bronze of the base.

After the celebrated model by Charles Cressent.

Three 18th century examples are known of this model, two made circa 1735, are in the collection of her Majesty the Queen at Windsor Castle, one in the Grand Corridor, visible in a Joseph Nash watercolor, the third is in the permanent coillection of the Musée du Louvre (inv. OA 10651). In an era prior to the widespread introduction of wristwatches in the 20th century, households depended primarily on their clocks to tell the time. These objects were expensive and luxurious items, prominently displayed in the house and were made with accurate movement.

Linke was born in Pankraz in Bohemia and was celebrated by the French as one of the greatest ébénistes of meubles de style at the turn of the century. He began his apprenticeship with a Bohemian master at the age of thirteen. Four years later, he toured Austria, settling and working in Vienna for two years. Linke arrived in Paris in 1875, and by 1881 he had established his own small workshop at 170 rue du Faubourg St. Antoine. Taking 18th century styles as his starting point and adapting earlier styles to contemporary taste, Linke produced fine quality furniture, steadily expanding his business during the next 20 years. He firmly established his reputation after receiving a gold medal at the Paris Universal Exhibition of 1900 for his extraordinary Grand Bureau. He continued to use international fairs as a means of exploring new markets, exhibiting at the 1904 World's Fair in St. Louis, the Liege in Belgium and the 1908 Franco-British exhibition in London. Linke's highly original designs sprang from the Régence and Rococo styles but were imbued with something quite new – Rococo curves were laden with gilt-bronze sculptural mounts in the tradition of A.-C. Boulle (1642-1732) or Charles Cressent (1685-1758). Stylistically, the new designs still adhered to the Rococo; the novelty, however, was Linke's fusion of the Rococo with the liveliness and the fluidity of the 'art nouveau'. The Revue called Linke's creations entierement nouveau, and continued to say that 'Linke's stand is the biggest show in the history of art furniture in the year 1900…' The mounts, or rather sculpture, were characteristic of the finest pieces from the Linke workshops. The most original designs were almost certainly created in collaboration with the enigmatic sculptor Léon Messagé, who excelled in creating lively, high relief, allegorical figures recalling the styles of Boucher and Falconet.

Charles Cressent (1685–1768) was a French furniture-maker, sculptor and fondeur-ciseleur of the régence style. As the second son of François Cressent, sculpteur du roi, and grandson of Charles Cressent, a furniture-maker of Amiens, who also became a sculptor, he inherited the tastes and aptitudes which were likely to make a finished designer and craftsman. Even more important perhaps was the fact that he was a pupil of André Charles Boulle. Trained in such surroundings, it is not surprising that he should have reached a degree of achievement which has to a great extent justified the claim that he was the best decorative artist of the 18th century. Cressent's distinction is closely connected with the regency, but his earlier work had affinities with the school of Boulle, while his later pieces were full of originality.
Details: