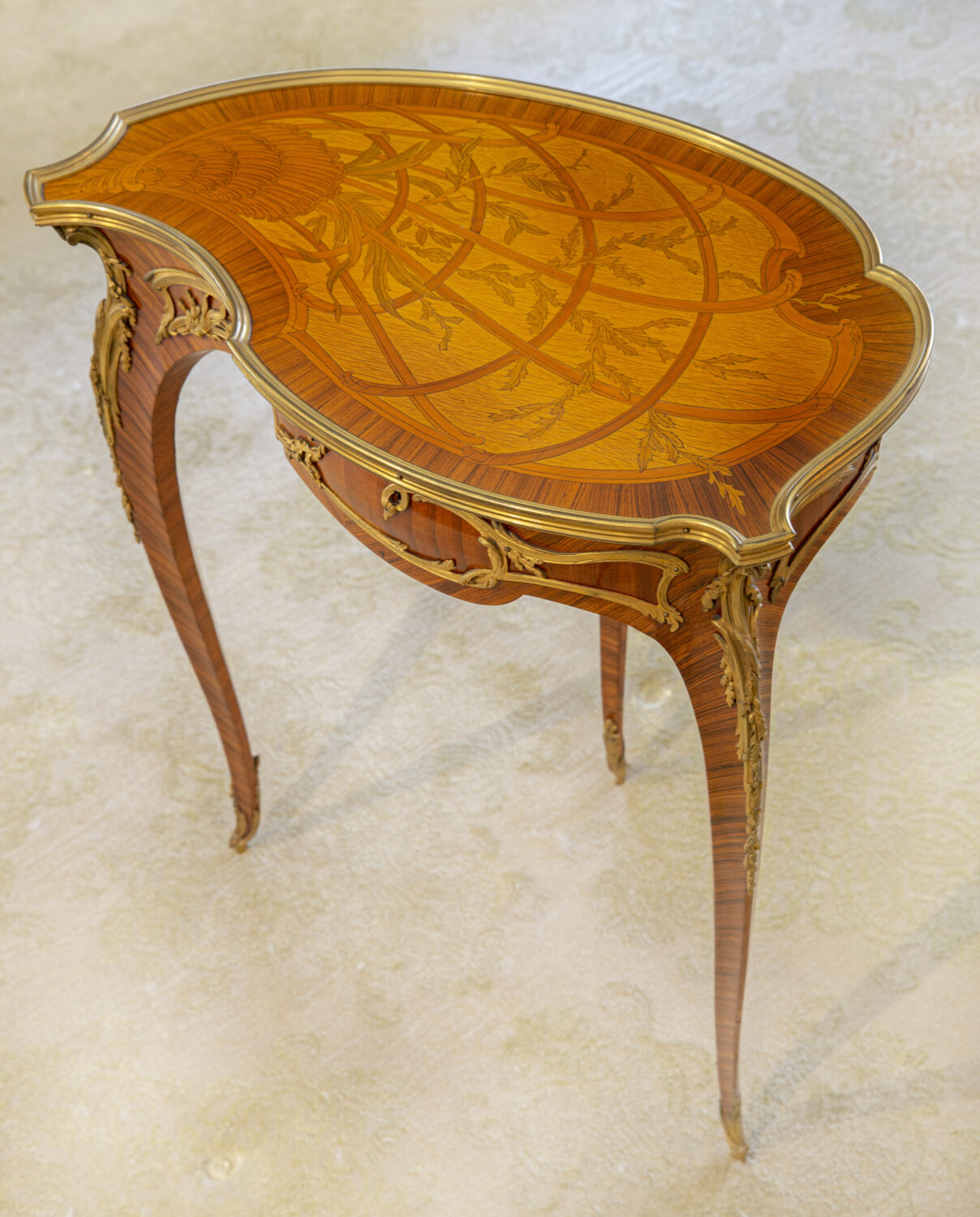 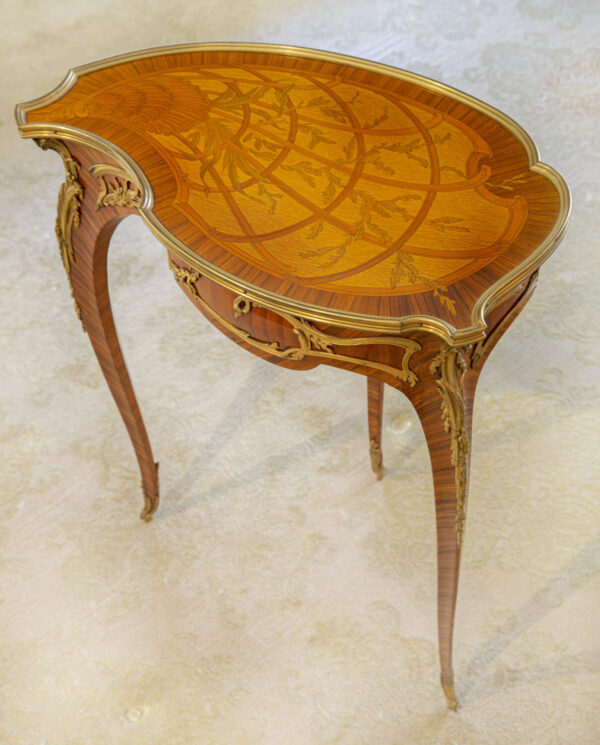 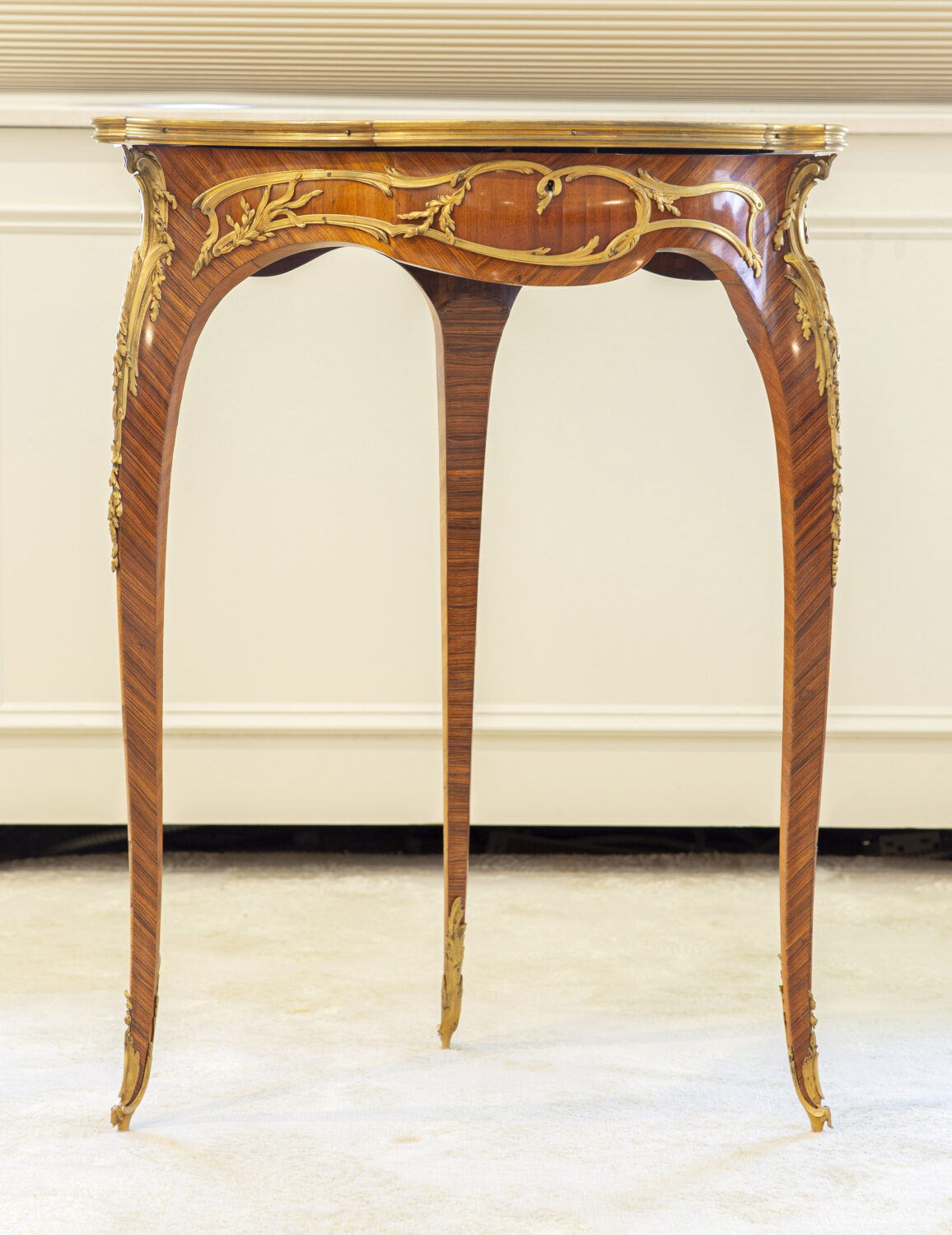 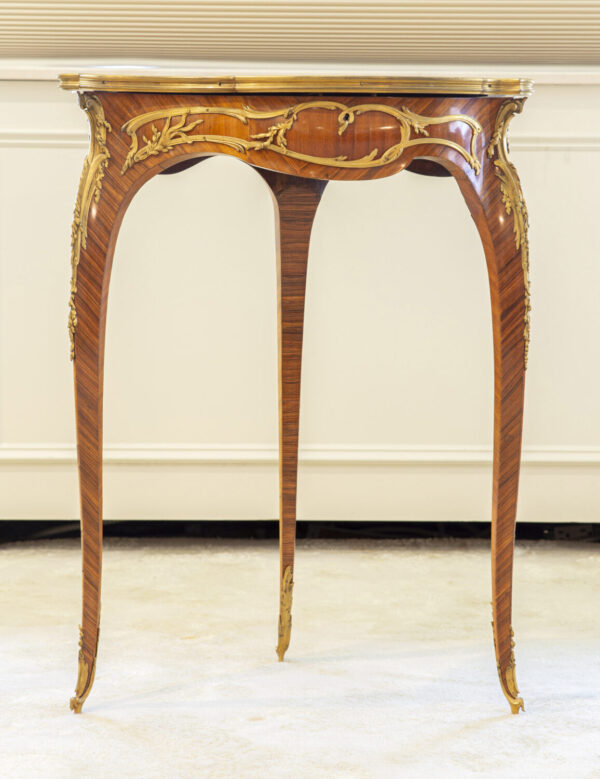 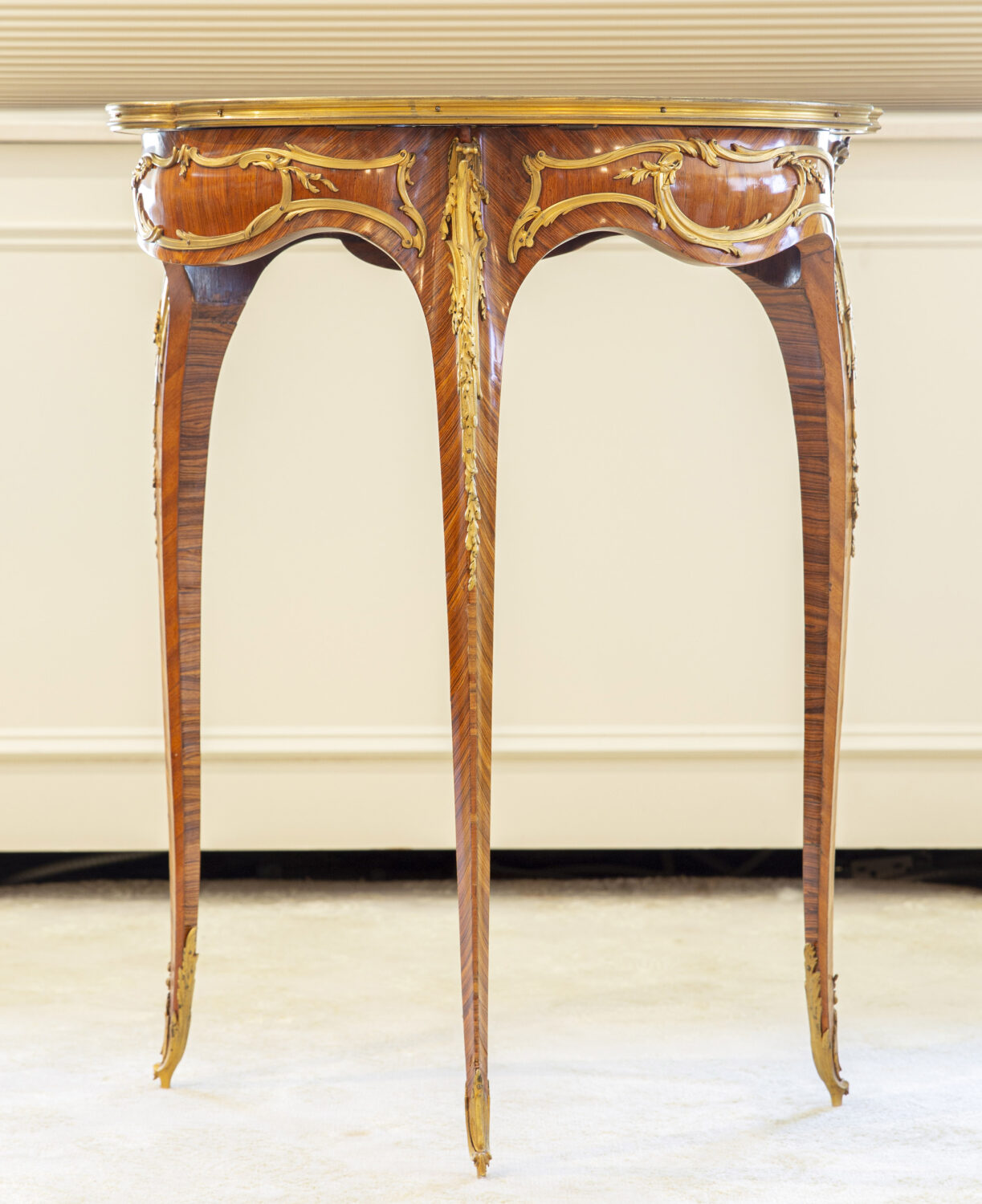 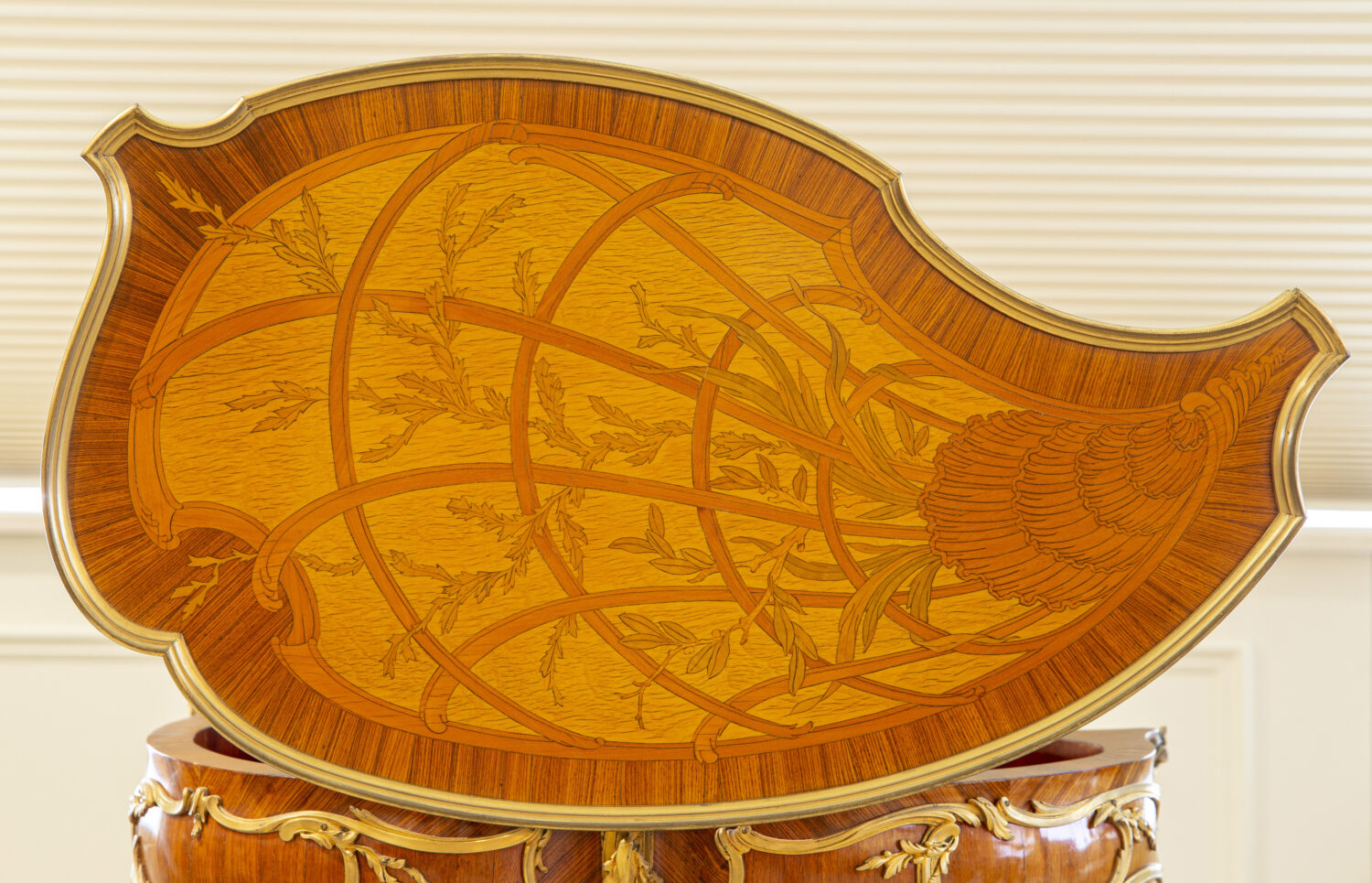 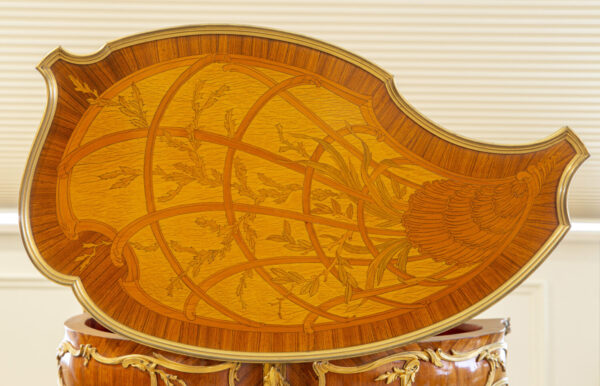 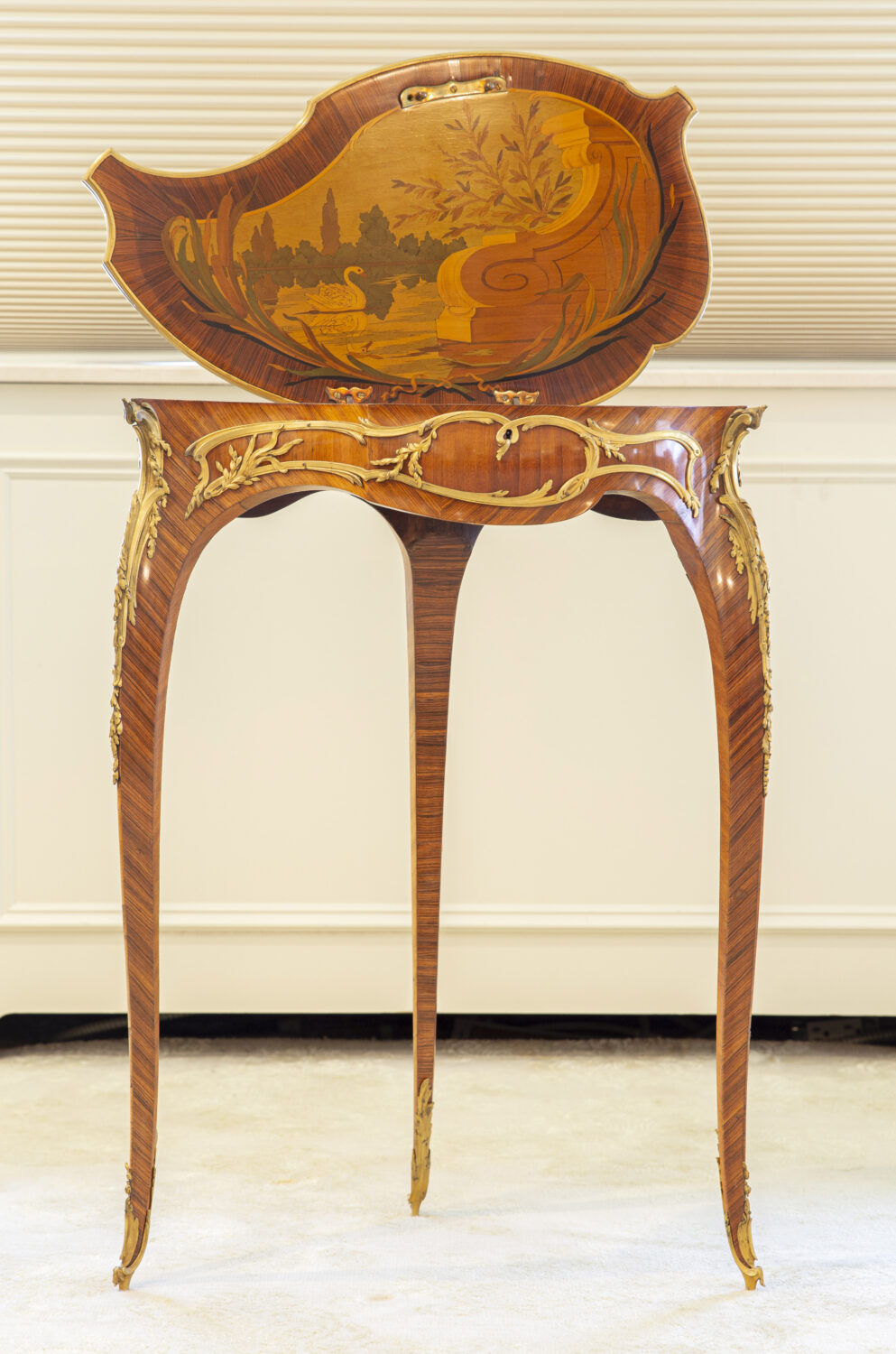 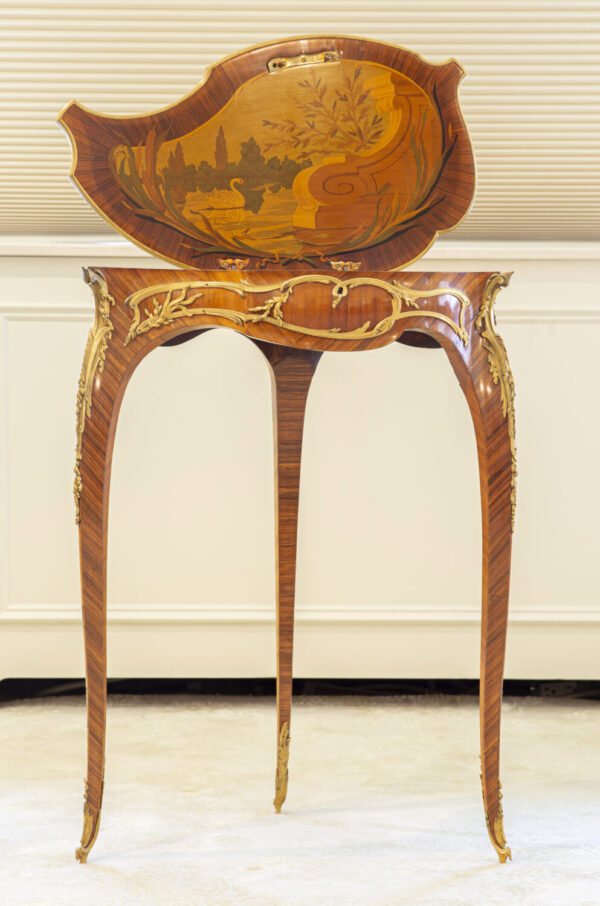 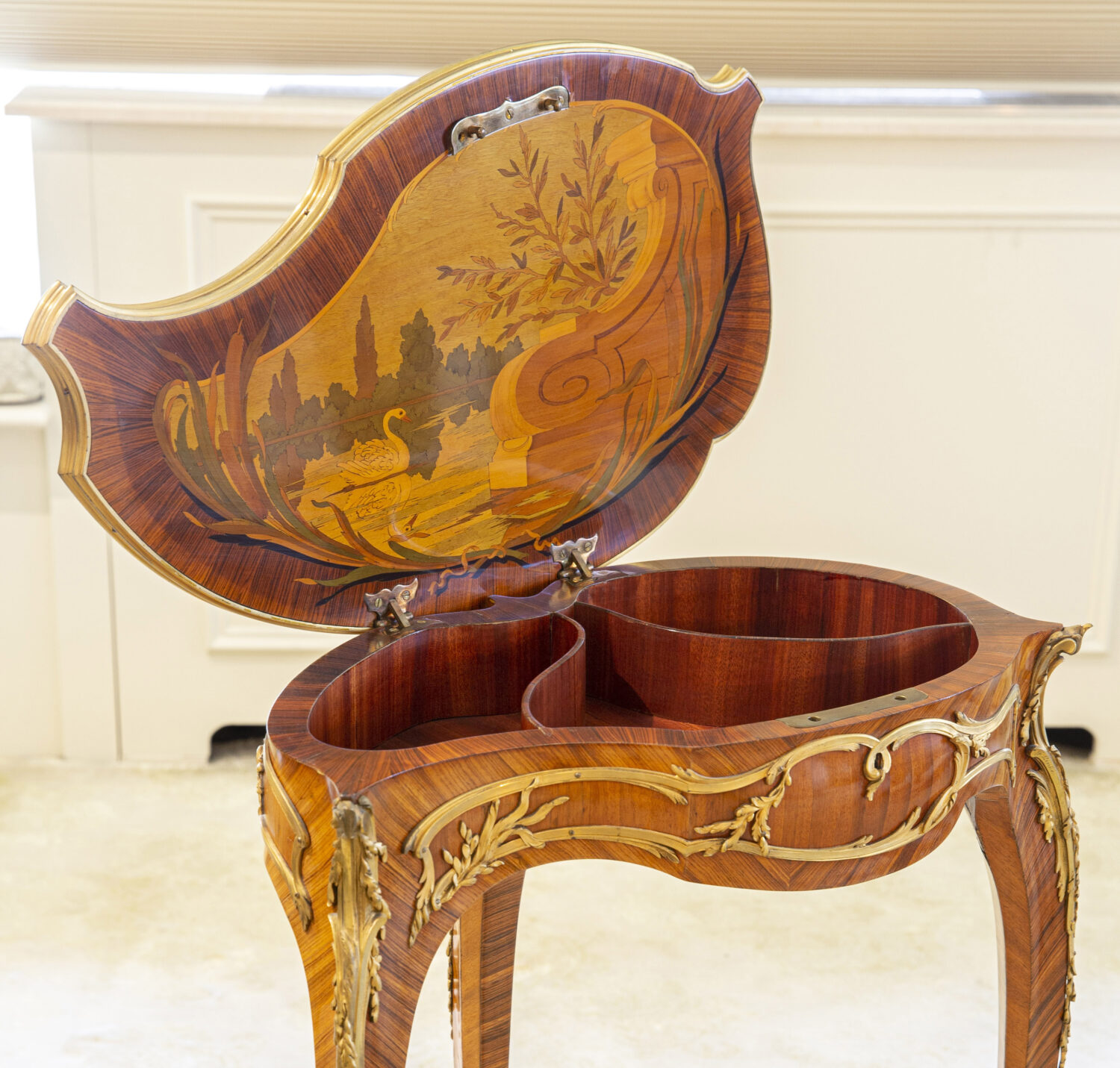 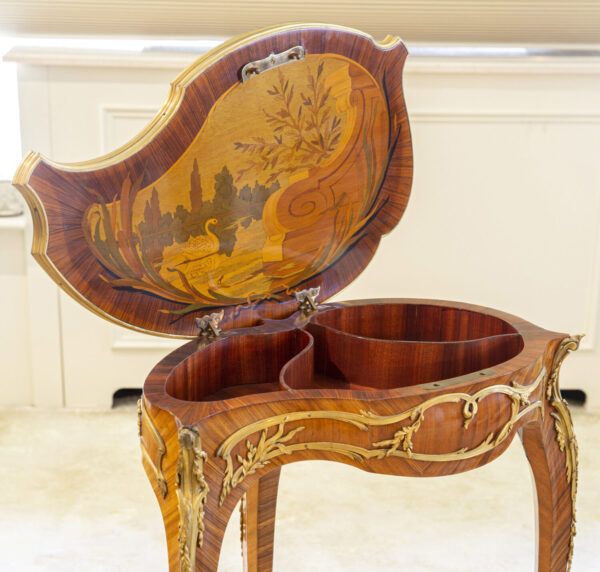 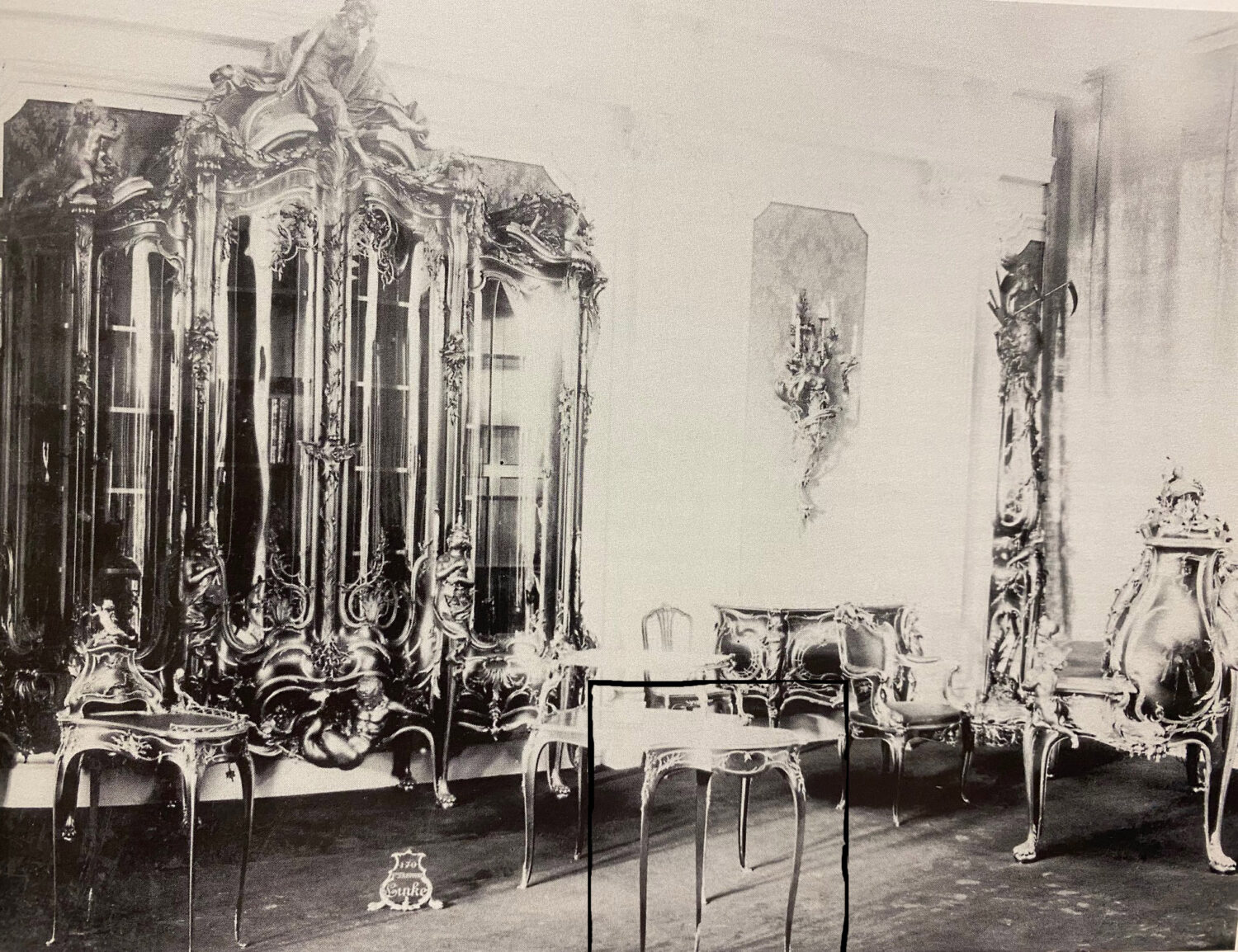 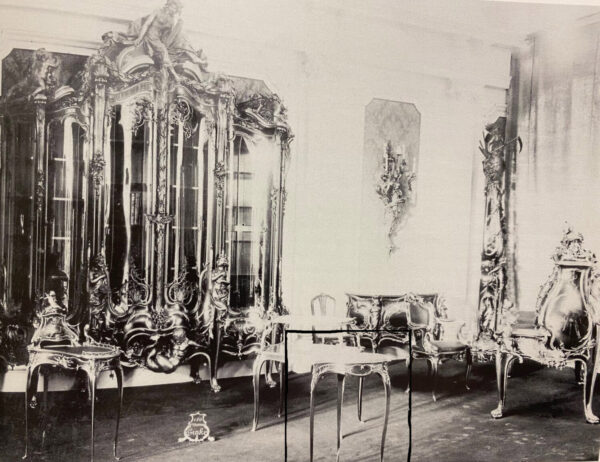 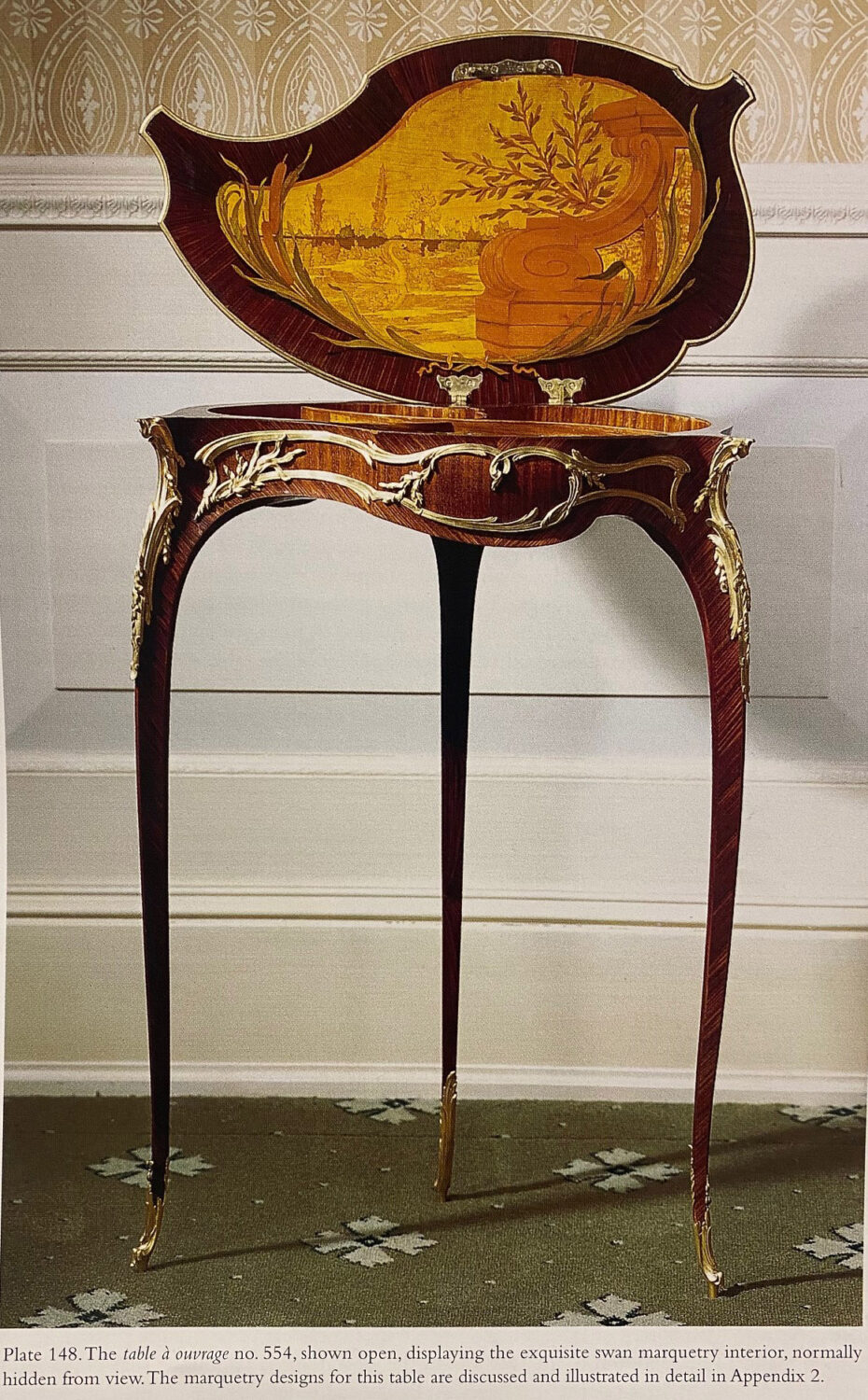 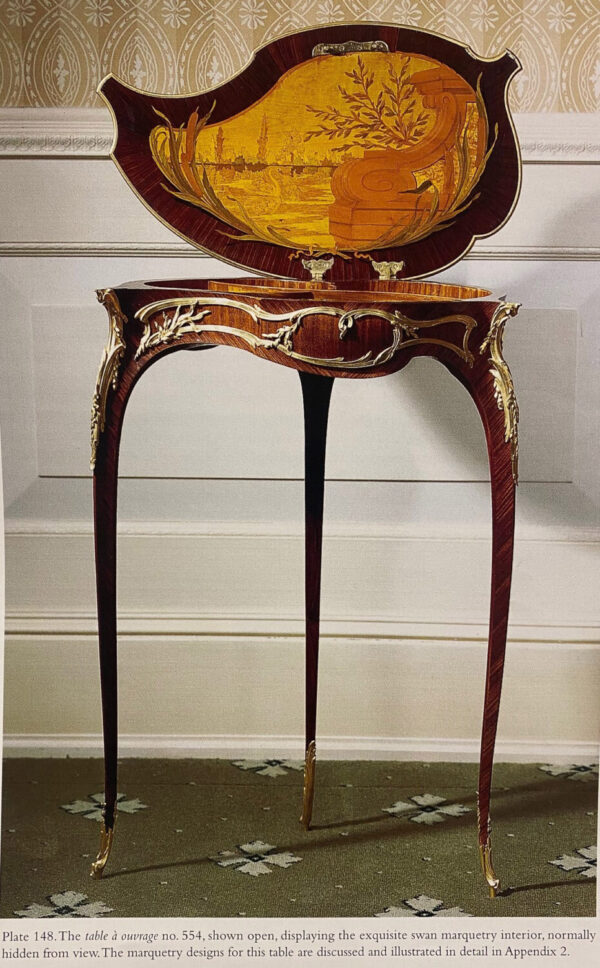 The beautifully curved table excellently designed, with a shell top and of a vegetable marquetry, the top flips open to a decorated marquetry landscape scene with a swan on a lake, with three separate compartments and standing on cabriole legs headed by pierced rocaille-cast clasps running to scrolled sabots.

The same model is pictured on Linkes’ 1900 Paris Exposition Universelle stand (page 123), along with a large full page colored sample of the table on page 137, in “François Linke 1855-1946 The Belle Epoque of French Furniture” By Christopher Payne.

Combining traditional Louis XV values with the modern idiom of the Art Nouveau, this table of unusual and innovative design, is a seminal item of Belle Époque furniture, the apogee of Linke’s collaboration with his idiosyncratic sculptor Léon Messagé. First designed circa 1898, this table à ouvrage has a similar but not identical footprint to Linke’s ‘Petit Bureau Louis XV,’ index number 552. The table was an important part of Linke’s oeuvre for his stand at the 1900 Exposition Universelle where he was awarded the Gold Medal. The stand included most of his iconic furniture for which he is celebrated today, although the Paravent Louis XV assortie avec meubles de l’exposition, lot 178 in today’s sale was not finished in time.

The top and inside of the lid are a tour de force of marquetry, the majority by either Fauchon or Béranger, both of whom supplied much of the marquetry for Linke in the 1900-1920 period. Small tables of this type were the staple diet of Linke’s production, Linke commenting at the 1900 Paris exhibition that he had sold many small tables. The model was so popular, that between 1900 and 1939, Linke may have made as many as twenty-one examples; however at least one, made in 1907, omitted one of the table’s most endearing features, the swan marquetry on the inside of the lid.

In researching his 2003 monograph on Linke, Christopher Payne discovered the original piqués drawn in the late 1890s for the marqueteurs to cut out the intricate colored wood sections. They were lying forgotten in a pigeonhole in the Parisian workshop once owned for three generations by the Immauville family who Linke had last used in 1942. The complex marquetry for the inside with a swan on a lake shows there were ten tones of green alone with the instructions ‘ne rien ombrer dans l’eau sauf les arbres et leur ombre,’ (‘no shading on the water, except for that of the trees’) (Linke, caption to pl. 425). Despite the complexity of the marquetry, the cost of the work seems modest by today’s standards, with the first four being cut by Fauchon at 475 francs per set; he had to agree to make the next set of four at 390 francs, which Linke whittled down to 375 francs. This can be measured against the cabinetmaking of the first example at 150 francs, the chasing of the bronzes 90 francs and the gilding, 65 francs.

The complexity of construction of this small table must not be underestimated. In 2003 a similar table, later sold at Sotheby’s New York, A Private Collection, 26th October 2006, lot 178, had been painstakingly conserved. Careful removal of the bronzes and their subsequent re-fitting revealed many unusual features of cabinetmaking difficult to recreate today. The table is unusually heavy with a weighting sandwiched between two boards of mahogany. Although not visible, it can reasonably be assumed that it is lead, as noted on the cabinetmakers’ plan by Linke. The bottom panel weighs 2.8 kilos alone, while the three elegant and slender legs of the table weigh just over 2.2 kilos, indicating the importance of the weighting for the table’s overall stability.

Considering the added weight of the bottom panel, the chosen fixing is surprisingly fragile, suggesting that it was added by Linke to aid the stability of what was an innovative design. Technically the most remarkable feature of the table is the delicate cabriole legs veneered in minute detail on all six sides. However it is the rear leg that is a masterpiece of construction, one difficult to replicate today. The complex line of the leg is veneered on an almost 180 degree curve; this and the other legs would have taken many hours of work to prefect and are almost unique in veneering technique.