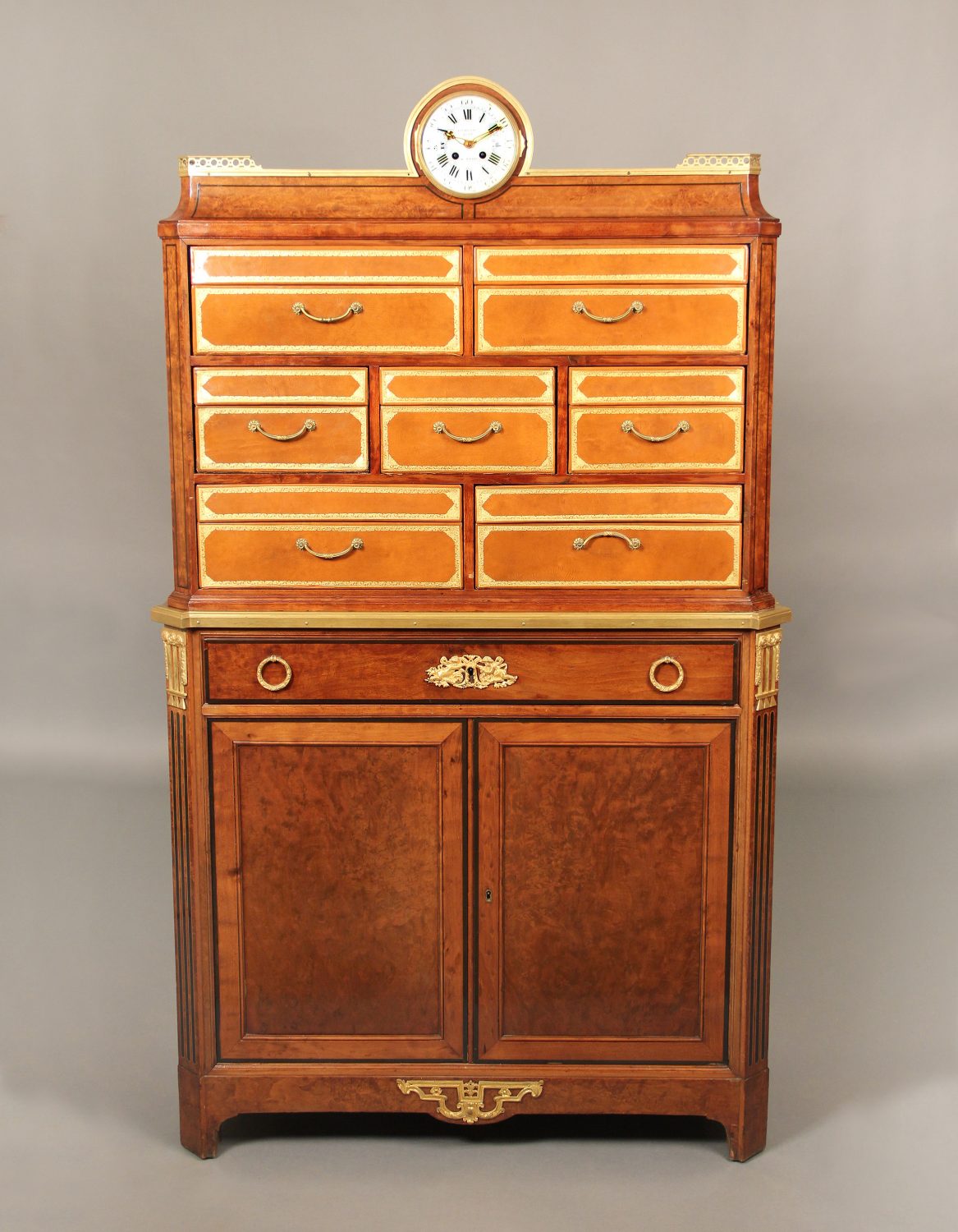 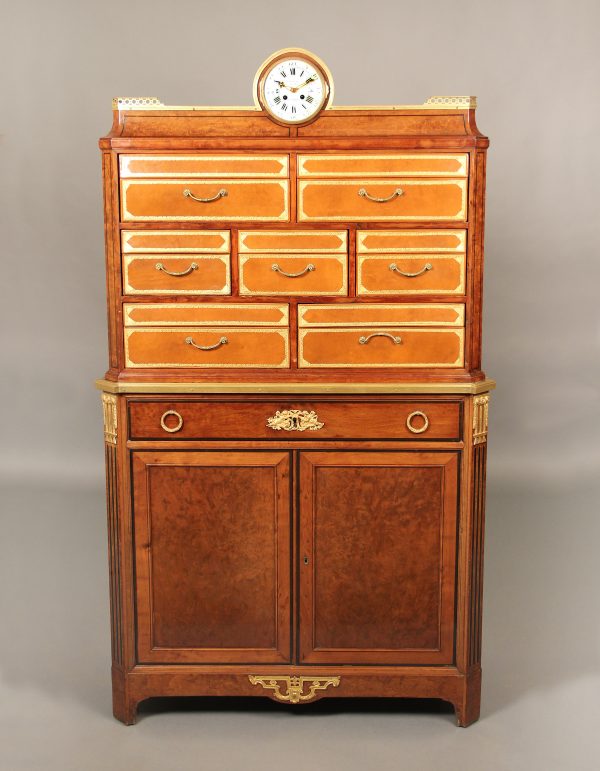 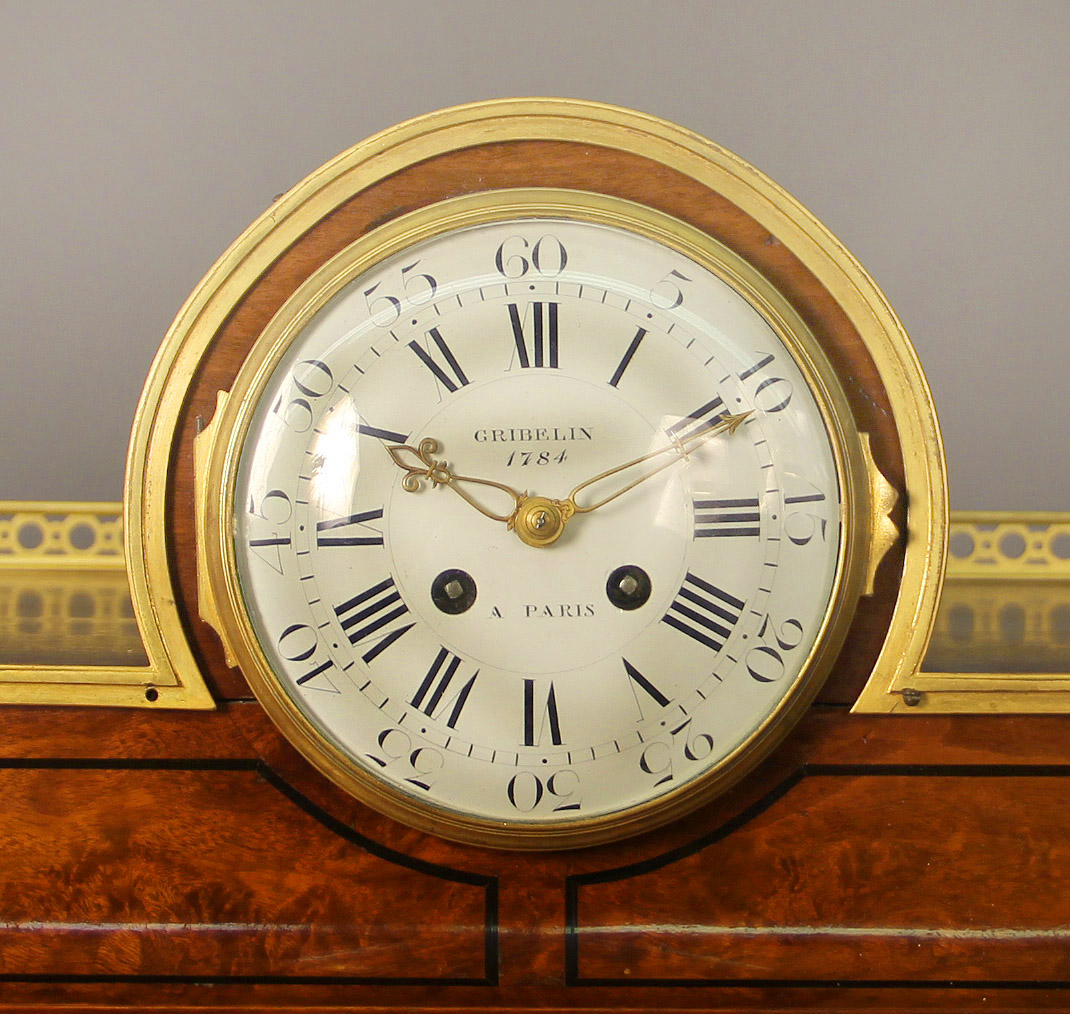 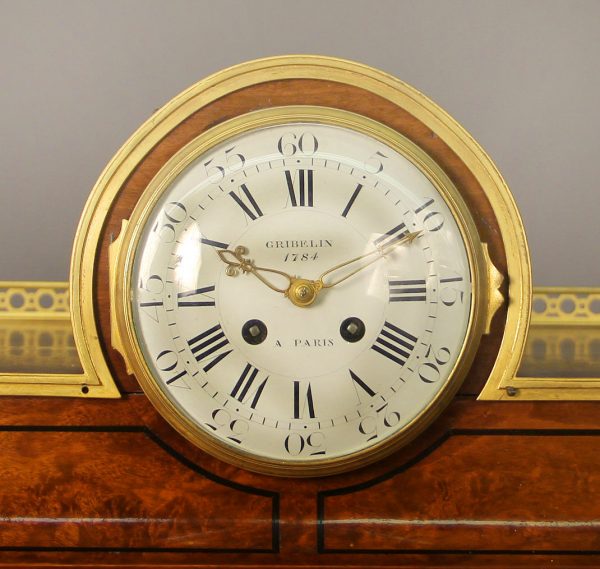 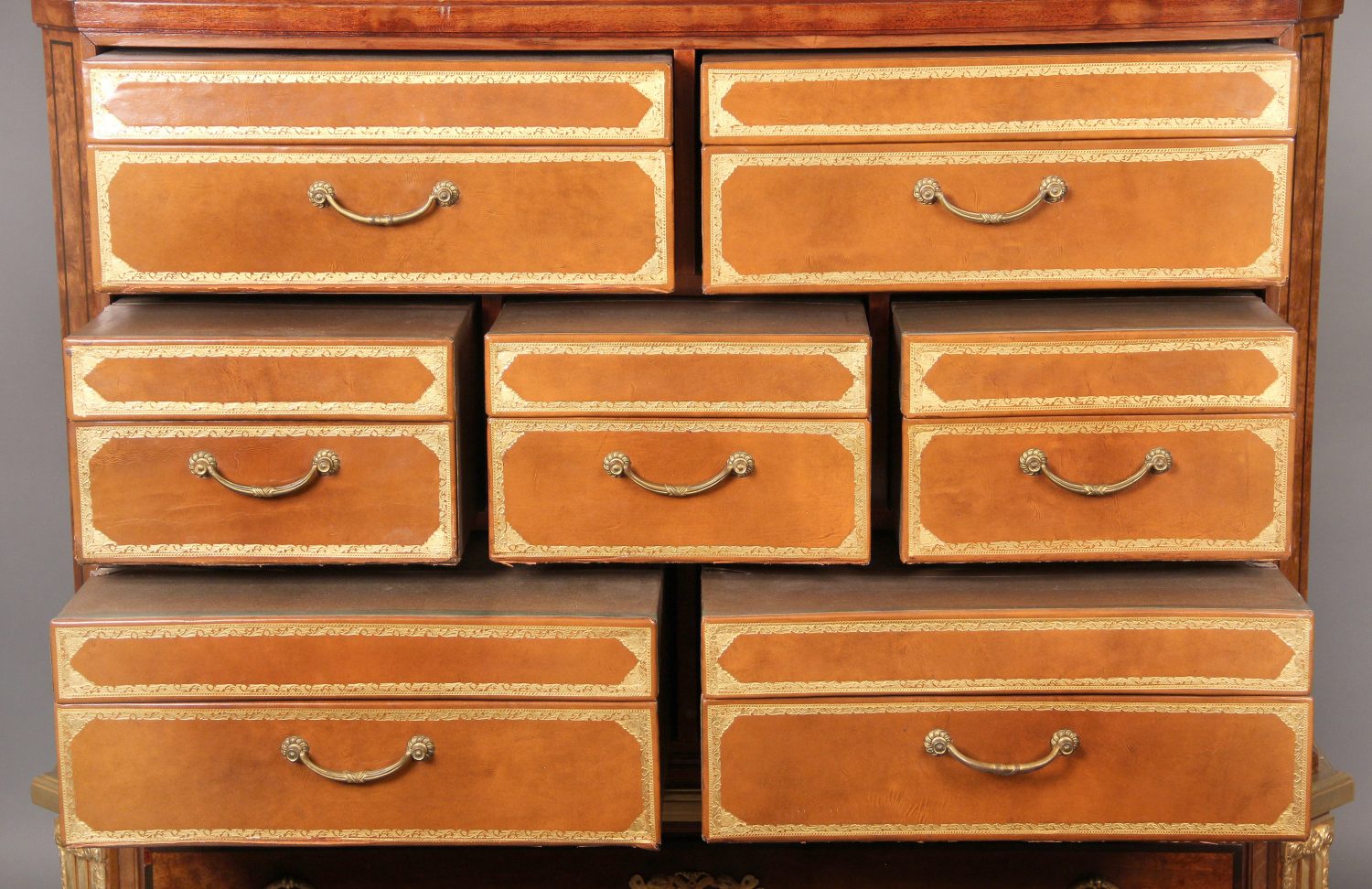 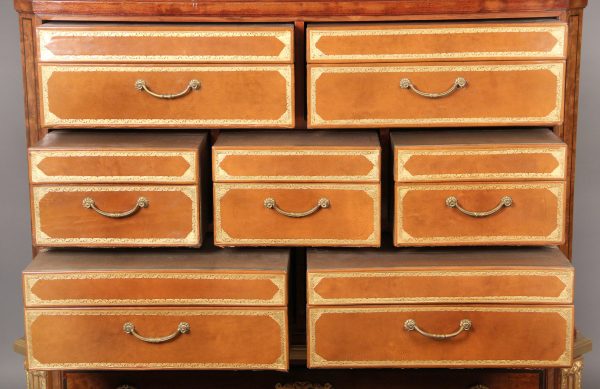 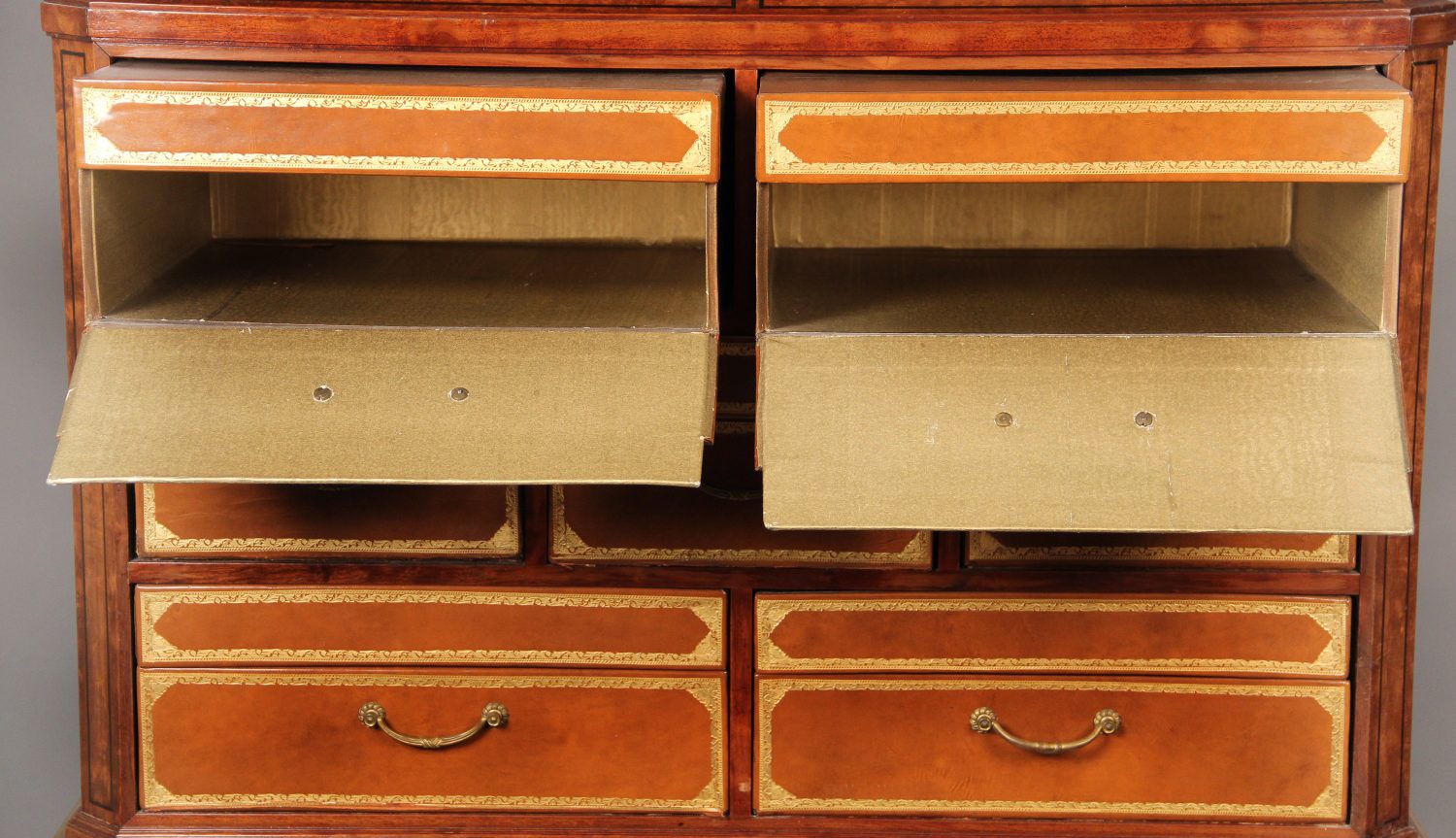 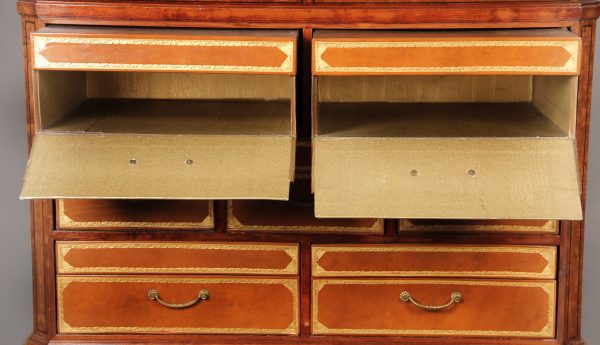 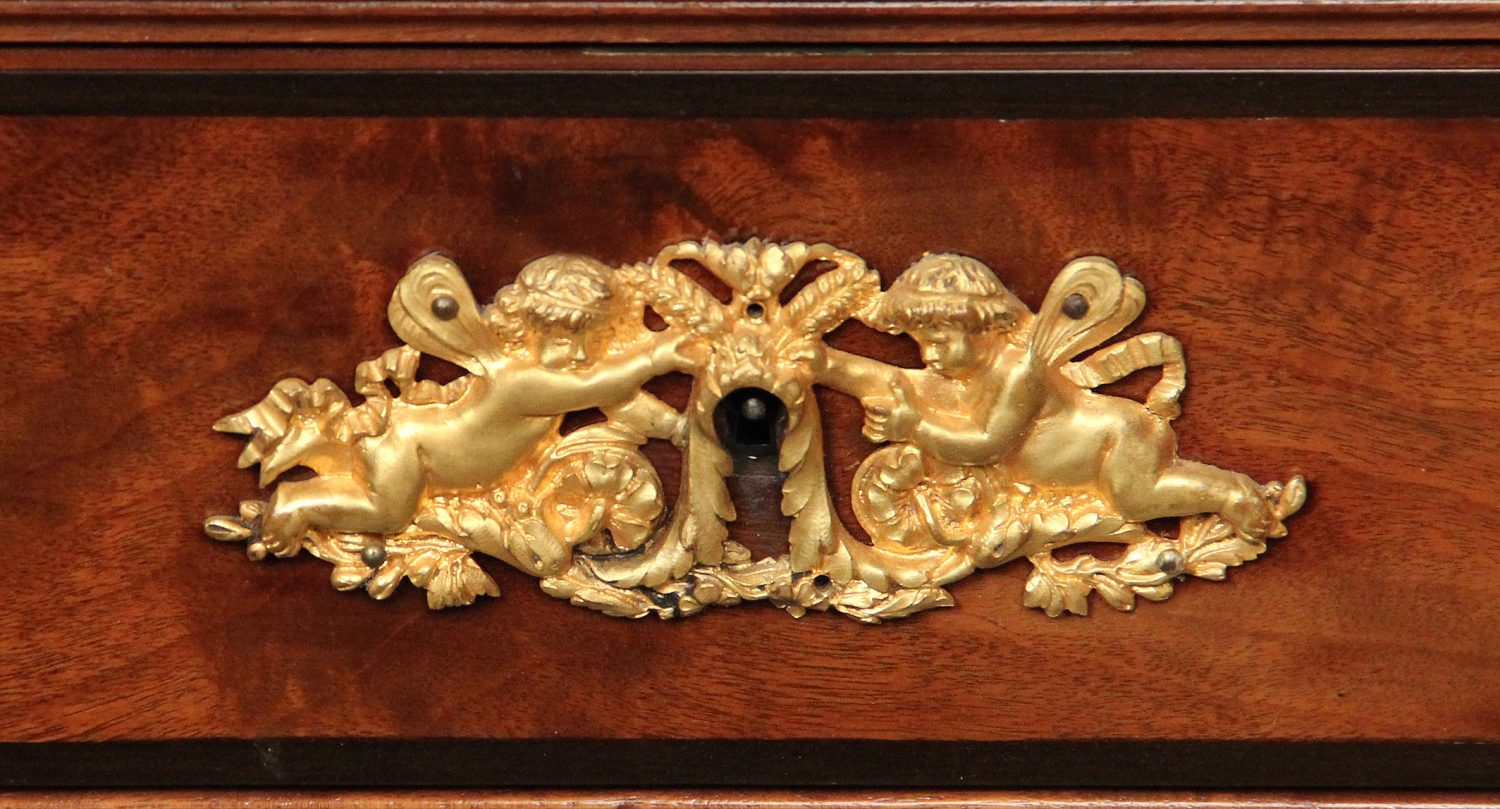 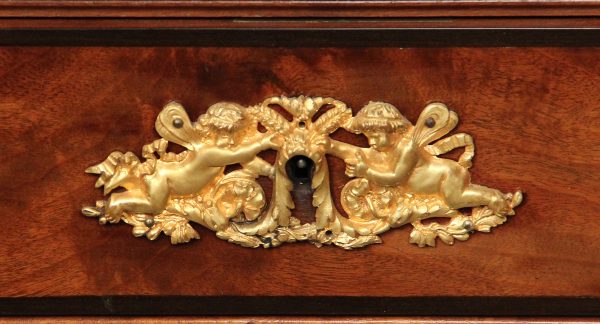 The upper section containing seven deep tooled leather veneer drawers, above a concave frieze surmounted by a three-quarter gallery and centered by a circular clock, the lower section with a pull out writing section over a pair of paneled doors enclosing three sliding trays. The clock works done by Nicolas Gribelin late 18th century.

Signed Krieger to the side bronze, the clock face signed Gribelin A Paris 1784.

Antoine Krieger together with his brother Nicolas launched Maison Krieger in 1826 at 17 rue Saint-Nicolas, Paris. In 1850 the firm was re-formed as Antoine Krieger et Cie, and then when Antoine Krieger died in 1856, his son-in-law began running the company and decided to change the name to Cosse-Racault et Cie. In 1880 the name was changed again to Krieger, Damon et Cie when the firm merged with Damon et Colin and was then located at 74, Rue Du Faubourg-Saint-Antoine. However Christopher Payne illustrates an account of 1912 (19th Century European Furniture, 1981, p.38) under the name Krieger, the firm presumably having gone through several takeovers resuming its former and well-established name.

Maison Krieger exhibited at the 1849 Exposition des Produits de l’Industrie in Paris and at the Universal Exhibitions of 1851 in London and 1855 again in Paris. At the 1851 Great Exhibition in London they were awarded a medal for an exhibition oak sideboard made for a client from the Ottoman Empire. Maison Krieger created numerous furniture styles, and the firm exhibited at all the major exhibitions of the nineteenth century up to and including the 1900 Exposition Universelle.

Maison Krieger is recorded as being a very active client of François Linke and occasionally the firms label can be found on Linke pieces.